The KRS Vanke Rays take to the ice on Saturday at the start of the Women’s Hockey League grand final. Brian Idalski’s team takes on Agidel Ufa in a true clash of the titans between the top teams of the season. It’s a best-of-five final series, with all games to be played in Ufa. 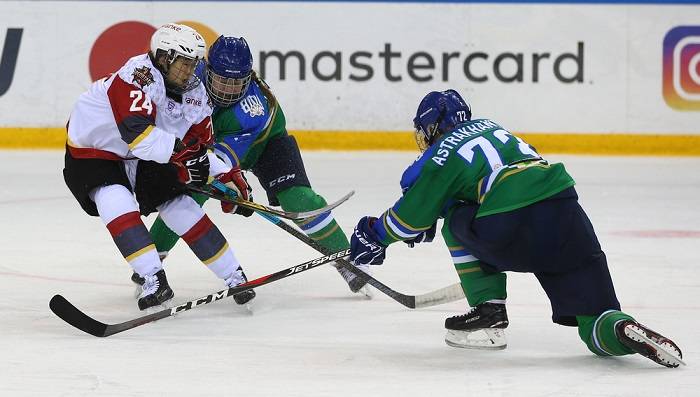 The best of the best

Almost from day one, it felt like the 2019/20 season was moving towards this final pair. Agidel and the Rays have been far ahead of the competition since the opening days of the campaign. Their dominance can be seen in the figures: 18 of the 20 leading players according to plus/minus stats represent one of the teams. Three points separated the top two in the regular season table, third-placed Tornado was 16 points adrift. Agidel also has the title-winning pedigree, having lifted the cup in the last two seasons and – thus far – never been defeated in a playoff series since the post-season was introduced in 2018.

The final series looks set to be a clash of styles. It’s not just the old contrast between Russian pass-and-move hockey and the more direct North American style imprinted in the Rays’ DNA after its time in the CWHL. KRS boasts the top offense in the WHL this season, with Alex Carpenter and Rachel Llanes topping the scoring charts. Agidel, by contrast, has the most miserly defense and goalies Anna Prugova and Maria Sorokina produced the most impressive stats of the regular season.

In head-to-head meetings, the Rays have steadily improved. Early in the season, our trip to Ufa brought 0-3 and 1-4 losses. However, on home ice we got a 2-1 victory over the defending champion before losing out in the second game of that series. Before all that, we had the better of a pre-season meeting with Agidel. However, for various reasons, few of these match-ups have seen the two teams at full strength. Several key Rays, such as US Olympian Megan Bozek and Finnish goaltending star Noora Raty arrived later in the season; Jessica Wong returned to the line-up in these playoffs, grabbing her first goal since November in that semi-final success against Tornado.

Experienced goalie Noora Raty is aware of the scoring power of both teams’ top lines – but won’t be surprised to see someone else become the hero in the upcoming battle. “[Ufa] has one very good line and our first line is scoring most of our points,” she said in an interview last month. “They may eliminate each other and we’ll need more players to step up and score.

“It will come down to who has the second or third line player that will contribute on the scoresheet.”

And head coach Idalski has every respect for the opposition. “Ufa is the most complete team in the WHL,” he told KHL.ru. “They have three solid lines with plenty of firepower and high-end talent. The defensive core is physical but all of the defenders skate well and move the puck well. To top that all off, the core of their group has been together and knows what it takes to win a championship.”

In the enemy camp, Agidel captain Katya Lebedeva is expecting a tough series. “The Vanke Rays are a good opponent,” she told the WHL website. “It’s no coincidence that they got to the final. They play active hockey, total hockey. They try to get on top of you all over the ice and that kind of in-yer-face play forces opponents into making mistakes.

“Games against a team like this are a battle of character and will, especially when there’s a strong North American accent like on the KRS roster. But when we’ve played before, we have proved that we can meet them on equal terms and come out on top.”

History in the making?

There was no competitive women’s hockey in the Soviet era and although the men’s USSR Championship included teams from several republics of the union, the trophy itself never left Moscow. In the post-Soviet era, leading teams from the former USSR competed in the International Hockey League but, again, were unable to wrest the trophy away from Russia. And today’s KHL is still awaiting its first foreign champion, although Lev Prague famously reached the 2014 Gagarin Cup final before losing to Metallurg. This season, Jokerit and Barys are hoping to change all that in the men’s game – but our Dragons can get there first in this competition.

Sadly, though, there will be no opportunity for our fans in Shenzhen to attend the series at our Universiade Arena. The on-going impact of Covid-19 makes it impossible to stage an event on this scale in China at present. But the situation back home remains in the forefront of everyone’s thoughts and, once again, the team will be proudly wearing its #wuhanstrong and #chinastrong patches in tribute to the efforts against the virus.

Game one takes place in Ufa on Saturday at 1300 local time. The second meeting is the following day at 1230. Game three will be on March 11 with the faceoff at 1500. If necessary, game four will follow 24 hours later and the winner-takes-all game five showdown would be on Sunday, March 15 at 1300.