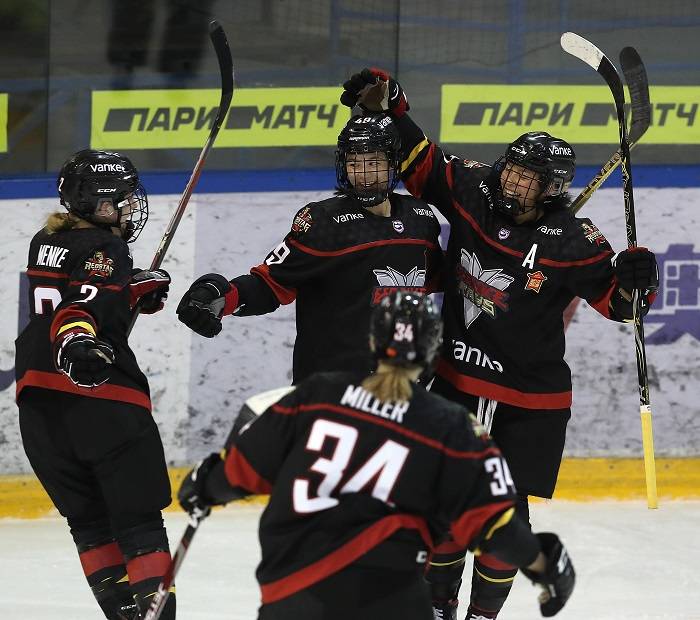 The Lady Dragons are going for gold! KRS Vanke Rays’ first season in Russia’s WHL will end in a showdown against defending champion Agidel Ufa with the big prize at stake. A convincing 6-2 victory over Tornado in Dmitrov saw the nine-time Russian title winner eliminated at the semi-final stage as our girls go marching on to the Grand Final.

This was the second meeting of the teams in three days. The opener was a tight affair, settled by a moment of brilliance from Rays’ leading scorer Alex Carpenter. Game two, notionally a home game but played in Dmitrov due to coronavirus concerns in China, was more comfortable. Two goals in a minute midway through the opening frame set up the win and, once in front, KRS was in no mood to offer the opposition a way back into the game.

Those goals came from Jessica Wong and Megan Bozek and represented just reward for our team’s enterprising start to the game. However, Tornado hit back with Lyudmila Belyakova scoring on us again in the first period. The second began with some big chances for the opposition, but Kimberly Newell kept her goal intact and, midway through the game Bozek potted her second of the night to restore that two-goal cushion and ease any nerves in the team. Rebecca Kolstad made it 4-1 before the second intermission and the outcome was all but assured.

There was more scoring to come: an individual effort from Rachel Llanes made it 5-1 before Alevtina Shtaryova got one back on the power play for Tornado. But there was no time for a fightback and Hannah Miller completed the scoring as Leah Lum got her third assist of the game.

After negotiating this semi-final with a minimum of drama, the Vanke Rays move on to a new challenge against an Agidel team that has been our biggest rival all season. The Ufa team topped the regular season table as it looks to defend its crown, and it eased through its semi-final series against Biryusa Krasnoyarsk in a manner similar to our own progress. After taking a moment to celebrate today’s success, Brian Idalski and his team will start plotting its path to a golden finale to this rookie season in the WHL.