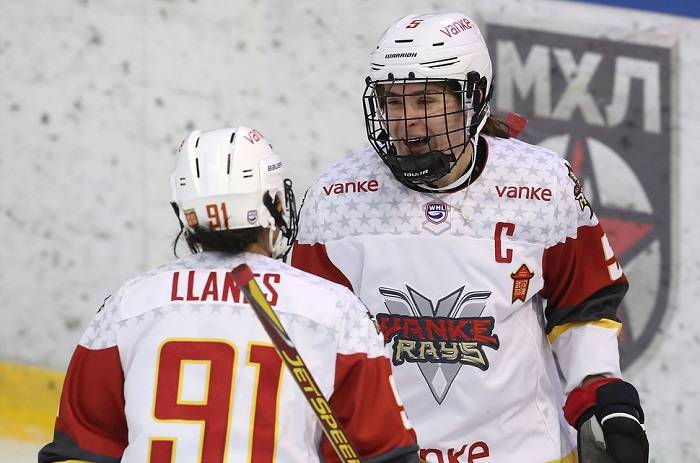 The Lady Dragons took a big step towards reaching the Grand Final in their first season in Russia’s Women’s Hockey League. Two goals from Alex Carpenter earned a 2-1 victory at Tornado in the opening game of the playoffs and leaves Brian Idalski’s team just one win away from booking its place in the final showdown.

However, this was a tough examination against a team that finished third in the regular season and a club that has won the Russian title nine times in its illustrious history. Tornado made a strong start, and took an early lead when Taylor Flaherty’s tripping penalty enabled Lyudmila Belyakova to score in the seventh minute. Russian international Belyakova is one of relatively few Russian players to compete in the North American pro leagues, playing a season with the Riveters in 2015/16, and she scored on celebrated Finnish international Noora Raty, who is back between the piping for KRS during this playoff campaign.

After that, though, the Rays stepped it up. Our girls dominated the rest of the first period without finding a way past highly-rated Russian youngster Anna Alpatova. That pattern could not continue into the second period, but a tying goal finally arrived – albeit in unlikely circumstances. Flaherty found herself in the box again, but this time the home power play faltered and Melanie Jue launched a counter-attack. Her pass found Carpenter in center ice and our American international ace advanced to fire home from the deep slot with Alpatova slow to react to the danger.

Then, early in the third, Carpenter showed her class once again with a fantastic solo effort. Collecting the puck on her own blue line, Alex raced through center ice, evaded two Tornado defensemen and deked Alpatova to the ice before roofing a backhand to give KRS the lead. After that, a solid defensive performance closed out the game, and Raty finished with 28 saves to frustrate the home offense and claim the win.

The teams meet again in Dmitrov on Sunday afternoon, with the Lady Dragons one step away from reaching the grand final in their debut season at this level.