“A really big step up” 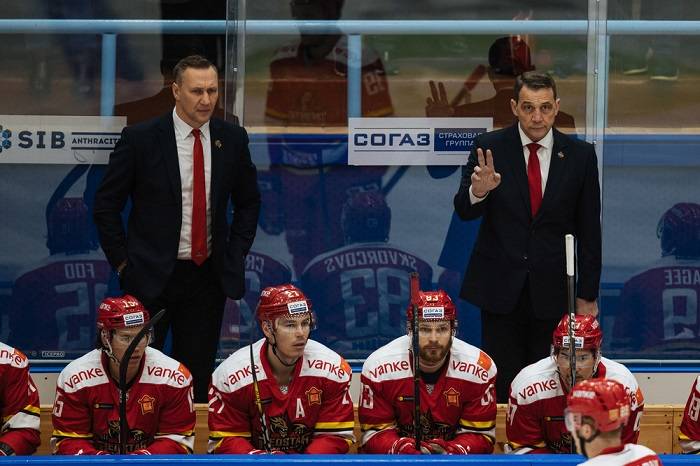 The Dragons battled hard throughout their fourth season in the KHL, falling just short of a playoff place in their final game of a demanding campaign. Once the dust settled, we caught up with head coach Curt Fraser to hear his thoughts about our season and the way the team is progressing.

What are you biggest impressions from your first full season with the Dragons?

I’ve learned a lot in this first season coaching this team. A lot about the players, the style of play needed to be successful in this league, about dealing with the travel, with the challenges that come with living in China. I’ve seen the competitiveness of the league, the CSKAs and SKAs. It’s been an amazing experience, something that will help all of our guys in the future.

It’s all about experience in this league. This season we had 15 first-year players on our team, and a first-year coach. But we’re playing against teams, against players and coaches that might have eight to 12 years experience. I’m glad I got this first year in, I’ve learned a lot and I think it will really help our future as we look to build a successful team.

How do you feel the Chinese players on the team are developing?

They are developing well. I think there was only one Chinese heritage player in the first year but now, in our fourth year, I believe we have 12 or 13. And look at the guys. Over the years, the heritage guys have been good players but we’ve really taken a big step up this season. Tyler Wong coming over has had a tremendous first year, Spencer Foo has done an absolutely great job, Ethan Werek has been around, maybe for short stints or whatever but I think he’s found his game here in the KHL. He can be a big contributor in the future. And I think Cory Kane continues to improve; we’re looking for big things out of Cory in the future.

Luke Lockhart has been here for a few years. Last year he seemed to come out of his shell a little and this year he’s stepped up to become a very valuable part of our hockey club. Adding Garet Hunt, a physical presence, has been very good for us. Brandon Magee played in the VHL most of the year, but he stepped up here and shown that he can be a valuable piece to our hockey team. We didn’t see Alex Riche this year, he’s been injured but I think in the future he will be another very good Chinese heritage player.

Then you look at Brandon Yip, he continues to be a strong leader for our group and at the back Vic Bartley has been a warrior for this hockey club all year. I think that Jason Fram, coming out of college, needed to get that year in the VHL and spend a year here to get his game to where it needs to be. Zach Yuen continues to work hard. He had that injury and it put him back a year, but he’ll be much better. Mikael Tam did some good things for us early in the season. There’s a lot of Chinese heritage kids who gained some valuable experience with us this year and hopefully that will stand them in good stead for the future.

You mentioned Luke, and it seems like you found a perfect set-up for him alongside Tyler and Spencer.

It is just that Luke Lockhart continues to earn his keep here, he earns the spots that he’s been put into. It’s not like he fell into it by accident. He started early in the year as a checking forward and then he progressed into having a good touch offensively. Now he’s used in both roles. He’s not only a good 5-on-5 responsible player. He can kick in on the offense, he’s an excellent penalty killer and we even use him on the power play now. And then he’s our top face-off guy. This kid has earned the right to be put into a position on the top two lines and he continues to improve which is the really nice thing about him. He’s not finished yet. Next year we’re looking for even bigger things out of Luke Lockhart and he’s only going to get better.

I think we’ve got a really good group now. They love each other, they like playing together. Now we just have to improve the pieces. We’ve got a good base, now we’ve got to work to upgrade everything a little bit more so that we can compete at a higher level against the better teams.

At times this season we called on players from the VHL team – not just the Chinese kids – and they stepped up and did a good job. This shows our system is working, right?

It takes time to build a real system, to have that foundation in place. You’ve got a good KHL team, you’re developing Chinese heritage kids, you’ve got good people around them, surrounding them with people who can help them develop and grow. Then you want the same thing underneath, doing the same thing in the VHL. That can feed your group on top. In this league you are under constant pressure with injuries and players going through tough stretches. You have to have depth and our VHL team really improved in the second half of this year, they’re doing a great job developing a lot of these young kids. Gunars Skvorcovs and the other guys called up to help out have been really good. The kids, Chris Seto, Hu Yang, Rudi Ying and others are all developing nicely. Everything is slowly coming into place, but it takes time. Hopefully we can continue building this group.

What do you see as the priorities for next season?

I think our goaltending is rock solid. Smithy and Simon did a fantastic job this year. I think we have to upgrade the defense. Murphy is a very very good offensive defenseman. If we can get two more just like him that can skate the puck out of our end, move the puck a little bit better, that will provide us some offense from the back. We still need to improve that.

With the forwards, we need to be stronger through the middle of the ice. That center ice position is something that’s a key for us. We have to build that up so we can find people that can distribute the puck a little bit better and improve our wingers and improve our scoring chances. We need to pump that up in order for us to score more goals. Scoring is something we’ve struggled with all year. We were in 35 one-goal games, eight two-goal games. We have to find a way to make a difference there. If we can upgrade our squad through the center ice position I think that would really help.

In previous seasons Red Star has often had big changes in personnel each summer. Are you closer to identifying a core group now?

That’s very, very important. Stability, having the core group in place and letting them grow. They’ve never had that at this club before, it’s been constant change. Change is our enemy. We need to find a way to keep these guys together for a while. You look at teams like CSKA and SKA, they don’t change all the time. They have players in place, they keep them for years and years and that’s why they have a great team. It’s very competitive. We have to catch up to that.

I think I’m the fifth coach here in four years. First of all, the coach has to remain in place. Now little tweaks or whatever might be a possibility, but your leadership has to start with the coaching, it has to be stable. Then the players can follow, you can keep that core group together for an extended period and let them grow. It’s the entire structure of our entire team, we need to find a way to keep everything together.

In the past, they never had that opportunity. It’s been too hard, been too tough. It’s a challenge to play on this team with all the daily things that happen and hopefully providing a little stability can really give us a step up in the future.

Looking back, did you feel there was a time when you could say, ‘that was a perfect game for us’?

The games we played against Avangard early in the season, that was our team, that was our group. We were healthy, we were playing very well, and you could see what our team was capable of doing. Through the year, we couldn’t sustain it. Players were getting injured, we were losing key pieces, we went through everything. But you have to keep a certain level of play and if it falls below a certain level, that’s unacceptable. The players have to learn that’s just how it’s going to be. But the games against Avangard, the game we played against Ak Bars, some other games through the year, even playing SKA in our building. We’ve done some really good things, but it hasn’t been consistent enough, there’s too many ups and down. Whether it’s down to injury, depth, travel, whatever it is, we have to find a way to be better if we are going to develop this group into the team we want.