Denied at the last 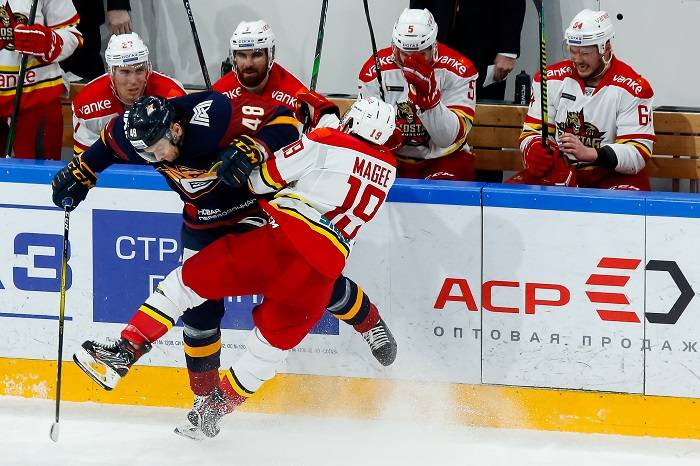 It came down to 20 minutes for the whole season. That was Adam Cracknell’s assessment as he went into the second intermission with Red Star trailing by a single goal in Magnitogorsk. All the effort, all the thousands of miles of travel around the league; every hit, every blocked shot, every goal and every save. The closing stages of this game would determine – beyond a freak sequence of results – whether it would be enough to add up to a playoff place.

The math was fairly simple. A Metallurg win lifted our opponent two points above us. The teams closest behind, Neftekhimik and Amur, would face off later in the day and a Neftekhimik victory would put it level on points with the loser of this game. Red Star still had one game left, against Dinamo Riga next Monday, but with the other contenders enjoying the luxury of games in hand, it would take something improbable to sustain more than a theoretical chance if the Dragons could not take something from Magnitogorsk.

Backs firmly against the wall, Kunlun produced a magnificent effort. In the third period, our guys fired in 18 shots at Vasily Koshechkin. Two more attempts bounced back off the piping. Yet it wasn’t quite enough. Metallurg extended its lead on the power play early in the frame, Sergei Mozyakin setting up Tomas Filippi for a one-timer with Simon Hrubec screened, and the fightback could not claw back the full amount. Ryan Sproul halved the deficit with a shot from the blue line midway through the frame; two Red Star forwards screened Koshechkin as the veteran goalie was beaten at last on the power play. Luke Lockhart hit the post soon afterwards as Kunlun continued to press, Ethan Werek was close to redirecting a Trevor Murphy shot beyond the home goalie.

Murphy then came even closer in the final seconds, but for a second game the goal frame worked in Metallurg’s favor. Metallurg was wobbling, but the siren saved the home team and left Red Star to contemplate what might have been. Frustrations bubbled over after the hooter, with Murphy picking up a misconduct call. All three goals on the night had come on the power play. It was that kind of game.

And, overall, it’s been that kind of run since the start of the year. Finishing the season with almost a month on the road has taken its toll on our guys, and that has played a part in some uneven results down the home stretch. The battle is not quite over – Amur’s win at Neftkehimik later in the day means there is still a theoretical chance – but at this stage the Dragons are reliant on the failings of others rather than being in a position to control their own destiny. But, as head coach Fraser points out, the team is going through a long reconstruction; 2019/20 has taught us much about the weaknesses still to be addressed, but also about the strengths that can be found in this group.