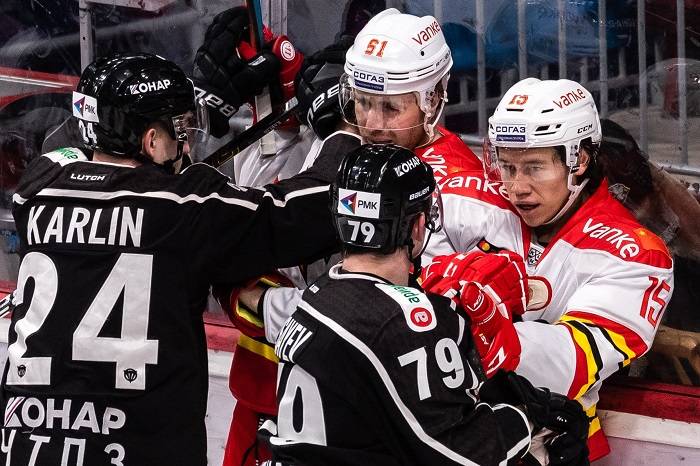 One point gained, or one point dropped? At a time when every last addition to the tally could be vital in securing that playoff spot, Saturday’s result will likely be easier to assess once the season is over. As it stands, though, Red Star remains in the playoff places, two points clear of Neftekhimik in ninth and level with Metallurg. Amur is a further two points back, while Admiral’s hopes appear to be over following its loss in Nizhnekamsk. It remains fearfully tight as four teams battle it out for two playoff spots, and today’s shoot-out loss could yet prove to be the difference between progress and disappointment.

In a fractious first period, Red Star found itself on the wrong end of too many unnecessary penalties. A bright start to the session steadily dissipated into a morass of flashpoints around the ice and Kunlun’s promising beginnings began to fade. Following the first round of penalties – Brandon Yip and Lukas Sedlak called for roughing, the teams playing 4-on-4 – Traktor got in front through Andrei Popov, rifling home Yaroslav Kosov’s feed from behind the net. Within a minute, Popov thought he had his second, but a coach’s challenge saw that one ruled out for offside. However, there was little scope to reassert the Dragons’ early ascendancy as both teams made regular visits to the sin bin and flowing hockey was rarity.

The middle frame was more satisfactory. Greater discipline brought greater rewards. A Red Star power play early in the session gave our guys some momentum, a penalty on Hunter Shinkaruk was killed with no great alarm and midway through the stanza Kunlun tied the scores. Shinkaruk was the provider, Luke Lockhart provided the emphatic finish with a wrister the zinged to the top shelf.

Just 30 seconds later, Kosov took a penalty and the Dragons needed just 10 seconds on the power play to get themselves in front. Trevor Murphy’s point shot flashed wide of the goal, but it came back off the boards straight for Ethan Werek to shoot the rebound into an unguarded net.

Two quick goals turned the game around, but unfortunately it wasn’t enough to build a lasting lead. There was little danger when Jeremy Smith went to field a puck behind his net, but an ill-considered clearance went straight to Vyacheslav Osnovin. He spotted the opportunity in an instant and shot the puck home off the skates of Werek to tie the game ahead of the second intermission. Smith, meanwhile, atoned for his error with a great double save to block a Nick Bailen shot and gobble up Sedlak’s attempt on the rebound.

The third period saw the Dragons have the bulk of the attacking play, helped by a long delayed penalty midway through the frame, followed by the traditional two-minute advantage. However, time in the Traktor zone did not translate into a flurry of big chances, although Brandon Yip and Devante Smith-Pelly both went close. Late in the game, Tyler Wong got into a dangerous position but his effort went wide and, with it, the game moved towards overtime.

In the extras, Red Star successfully killed a penalty on Lockhart but could not trouble Traktor at the other end. And the shoot-out was taken by our host, with Lockhart the only Dragon to convert his attempt.

Now Red Star has just two more games: a visit to Metallurg on Monday to take on another team desperately battling to make the playoffs, then a ‘home’ game against Dinamo Riga to be played in Novosibirsk due to restrictions on staging mass public events in China during the current public health situation.