Last week’s international break saw Red Star enjoy some valuable recovery time without being disrupted by call-ups to the various national teams in action around the world. With the regular season entering a crucial phase – just a handful of games left to clinch that playoff place – that uninterrupted preparation could make all the difference as Curt Fraser and his team look to end a four-game skid and deliver a strong finish on the way to a playoff place.

And the coming week is even more significant with four games in eight days – all on the road – likely to determine the outcome of our campaign. Here’s all you need to know about the itinerary. 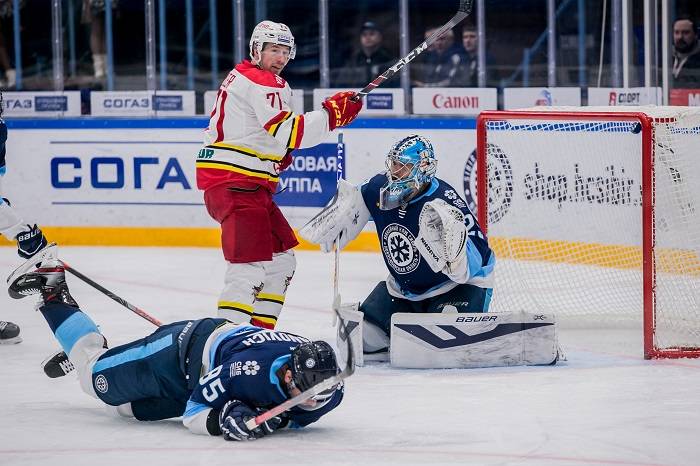 Last time out: We had back-to-back games against Sibir in Beijing last month. They served up two thrilling encounters, but unfortunately the Dragons lost out both times, going down 3-4 in regulation then losing a shoot-out after a 4-4 tie.

Background: Last time we met Sibir, both teams were battling to secure a playoff place. Since then, however, the Siberians have climbed to a more comfortable position. Although still not mathematically assured of a top-eight finish, the Novosibirsk team is up to fifth, boosted by an on-going run of three straight wins. Indeed, Sibir could secure its post season ticket if it beats Red Star on Tuesday and Admiral loses against Salavat Yulaev.

However, defeating the Dragons is not something that comes easily to Nikolai Zavarukhin’s team. Games between the two teams tend to be tight and half of Sibir’s wins against us have required a shoot-out. If business is settled in regulation, it tends to be in Red Star’s favor. Moreover, that three-game streak is characterized by tight games: a 1-0 win at rock bottom Dinamo Riga, a 3-2 verdict over lowly Dinamo Minsk and a shoot-out win against Avtomobilist.

And another statistical quirk to ponder: Sibir’s current winning streak began after losing 0-3 to CSKA in Moscow. Red Star’s last game? A 0-3 loss in Moscow at the hands of CSKA.

Last time out: Severstal came to China in mid-October and stole an overtime verdict on a power play goal with one second left on the clock. It was a frustrating loss for Red Star after Ethan Werek’s second-period goal put us ahead.

Familiar faces: Severstal defenseman Geoff Kinrade had a short spell with the Dragons in 2017/18, playing 26 games for 4 (2+2) points before moving on to Torpedo.

Background: Severstal has endured another difficult season in the Western Conference, with Andrei Razin unable to inject any consistency into a youthful roster. At the time of writing, the Steelmen have a theoretical chance of making the playoffs, by the time the puck drops on Thursday that hope may already be over.

Defense has been Severstal’s problem, allowing 160 goals in 56 games. That’s the third worst figure in the KHL, and no team in the Eastern Conference has been quite so generous to opposing forwards. Recent form hasn’t helped. After defeating Dinamo Minsk on Jan. 25, Severstal dropped four games in a row, losing to Vityaz (1-4), Sochi (0-3), Torpedo (0-5) and Neftekhimik (2-6). While Red Star is also on a four-game skid, our displays in those outings brought rather more goals and more competitive performances, often against more challenging opposition. At this stage of the season, this is the kind of game where – hopefully – our more urgent need for points can inspire a valuable victory.

Last time out: Two late goals saw Red Star slip to a 1-3 loss at the end of January.

Familiar faces: Traktor head coach Vladimir Yurzinov was the first man behind the bench in the Dragons’ Lair. Forward Gilbert Brule also had a spell in Chelyabinsk.

Background: Marooned at the foot of the Eastern Conference, Traktor could be mathematically out of playoff contention before this game is played. However, the Chelyabinsk team is still a dangerous opponent. The Czech combination of Tomas Hyka and Lukas Sedlak has been effective throughout the campaign, contributing 64 points between them on a team that has just 112 goals in total. Nick Bailen, too, has had a productive campaign with 22 points from the blue line, but beyond that scoring has been patchy.

With the 2019/20 campaign drawing to a close, Traktor’s remaining games represent a chance for the team to rehabilitate itself after a disappointing season. It’s also one last opportunity for these players to prove their worth before the next round of contract talks gets underway in earnest. There will be plenty to play for on both sides in this one.

Last time out: Our home game back in November brought the Dragons a first ever regular season victory over Metallurg. Goals from Adam Cracknell, Spencer Foo and Luke Lockhart secured a 3-1 success.

Familiar faces: Our defenseman Alexander Osipov joined Metallurg during the 2015/16 campaign. He went on to feature in 12 playoff games as Magnitka went on to win its second Gagarin Cup.

Background: In a normal season, Metallurg’s playoff place would be secure long before the end of February. But this is no normal season. A slow start in Magnitogorsk saw Josef Jandac lose his job back in September – but not even the return of Ilya Vorobyov could resolve the team’s problems. Plagued by inconsistency throughout the campaign, Magnitka is in unfamiliar territory as it looks to preserve its proud record of reaching every post season in the KHL era. Recent games highlighted the unpredictable nature of the team: on Jan. 26, Metallurg suffered a 1-6 hammering at Avangard; a week later the teams met again with the Steelmen sneaking an overtime verdict.

Unusually, goalscoring has been an issue. At the time of writing, Metallurg has 124 goals from 54 games; of the teams in the top eight, only Sibir (123) has fewer. While Sergei Mozyakin remains a formidable marksman – and leads the team’s scoring with 34 (13+21) points – others have fallen short. Brandon Kozun’s effectiveness has been blunted by injury, Denis Parshin was released from his contract after failing to impress.