Back to the old school 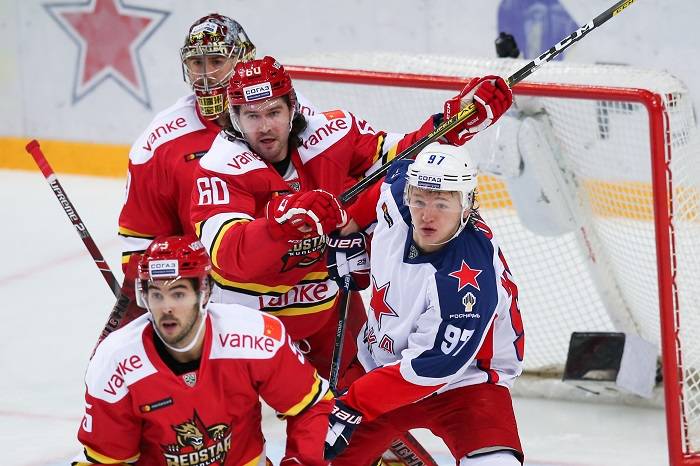 The CSKA Ice Palace on Moscow’s Leningradsky Prospekt is one of the venerable venues of Russian hockey. Today, this old-school rink was home to the newest team in the league as the Dragons set up a temporary new lair in the Russian capital. For one night only, against CSKA, the Russian capital would join Beijing, Shanghai and Shenzhen on the list of cities that have staged Kunlun home games in the KHL.

If CSKA’s history is formidable, Igor Nikitin’s present-day team shows signs of building another period of dynastic domination. Last season’s champion is on top of this year’s table and there are ominous signs that a roster stacked with international talent can go the distance once again in 2020. Our task was to check that progress and pick up much-needed points towards our own, more modest ambition of securing a playoff place.

Unusually, head coach Curt Fraser named seven defensemen in his roster, with Jason Fram added to the team. And extra depth on the blue line did no harm in a first period that saw CSKA pile on the pressure while our guys dug in bravely. Jeremy Smith turned away 17 shots, a further six were blocked and the Army Men marched off at the intermission frustrated by a blank scoreline.

In the end, though, the pressure told. Anton Slepyshev is one of the KHL’s in-form forwards at the moment and he took his productive streak to 13 games when he assisted on Mario Kempe’s opener early in the second period. Red Star continued to battle. Ryan Sproul had decent look at Johansson before the opening goal, Ethan Werek troubled the Swedish goalie shortly afterwards when he looked to get to the rebound from a Trevor Murphy shot. At the other end, Smith pulled off a fantastic save to deny Kirill Kaprizov after a slick passage of tic-tac-toe from the Army Men.

For the most part, though, our offense struggled to get inside the opposition D and the next goal went to CSKA when Maxim Shalunov smashed home Konstantin Okulov’s feed from behind the net. And the Army Men put the seal on the final scoreline early in the third through Mikhail Grigorenko, setting up a repeat of the 3-0 verdict when we met at the CSKA Arena across town earlier this year.

Red Star goes into the latest international break in seventh place in the East, still three points clear of Admiral in ninth. A playoff place is still very much within reach; while the Sailors have games in hand, they still need to convert them into wins. The closing weeks of the campaign promise to be intense as we look to regroup and make that final push to take us into our second KHL post season.