Reasons to be cheerful

January ended with a run of tough losses – and February starts with a difficult engagement at defending champion CSKA. The game has been switched from Beijing to Moscow, due to health concerns and an earlier decision aimed at easing our travel plans and avoiding an awkward one-game return to China. In spite of those challenges, however, there are some reason for optimism ahead of our meeting with the Gagarin Cup holder. 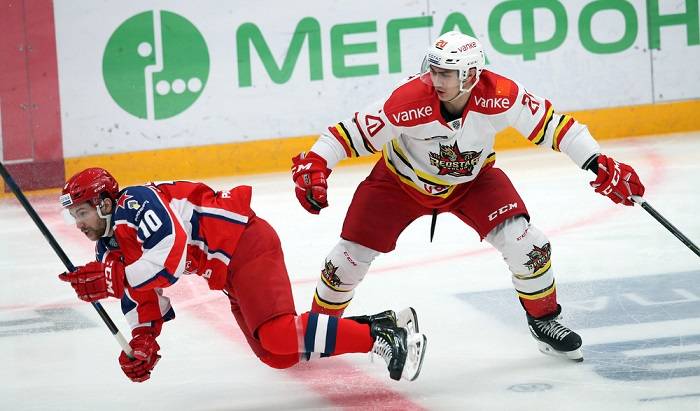 Last time out: We went to Moscow at the start of January and suffered a 0-3 loss at the hands of the Army Men. In seven meetings so far, Red Star has one win and one overtime loss against the most titled team in world hockey.

Background: On paper, this is a mismatch. CSKA has a commanding lead at the top of the KHL table and looks to be on course to top the regular season standings once again. In form forward Anton Slepyshev has been among the points in the last 12 games, partner Kirill Kaprizov saw an 11-game productive streak come to an end on Friday at Amur.

However, there are some signs that Red Star can ask some questions of this opponent. First, for once, the teams’ travel plans work in our favor. True, the Dragons have been on the road for some time, visiting Jokerit, Spartak and Traktor in their last three games. But while we made the relatively short hop from Chelyabinsk back to Moscow, CSKA was wrapping up that long voyage from the Far East. And the Red-and-Blues had to bundle up a loss at Amur in their baggage on that journey: a 3-4 loss in Khabarovsk was a sharp reminder that this team, impressive as it is, can be defeated – and not just by the KHL’s biggest hitters.

And, while talking up the scoring prowess of CSKA’s players, let’s not forget the achievements of our own. Slepyshev’s run is undeniably impressive, but across the last five games his seven-point haul is matched by Brandon Yip’s. Unlike Slepyshev, who enjoys a role on a team that wins consistently and is expected to play each game on the front foot, Yipper has compiled his points during a difficult run for a team that has to anticipate putting in some serious shifts in its own zone. Viewed in that context, our captain’s scoring form is every bit as impressive as the more high-profile stats produced at CSKA.

So, while nobody could sensibly argue that this game offers the highest likelihood of collecting a win, it’s by no means the foregone conclusion some might dismissively assume. Over the course of the season, our Dragons have shown that they need not be daunted by the reputations of others; Sunday’s game is another chance for an underdog to bare its fangs.