Defeated by a familiar face 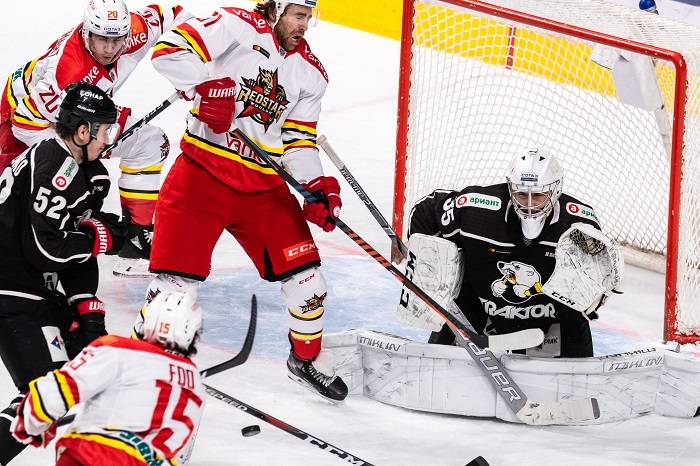 In the Dragons’ debut season, Vladimir Yurzinov was the head coach that took the team to the playoffs. Today, behind the bench at Traktor, he dealt a blow to our hopes of repeating that achievement this season.

Red Star made three changes for this game, with Garet Hunt, Brandon Magee and Denis Osipov all returning to the line-up. Brandon DeFazio, Gilbert Brule and Ryan Sproul made way, while the familiar tactic of switching goalies meant that Simon Hrubec got the start ahead of Jeremy Smith.

The revised line-up arguably brought a bit more aggression to the team for a visit to an opponent struggling for form. This season has been tough for Traktor, and the host was on a four-game losing streak. Anticipating opposition ready to fight for everything, Curt Fraser looked for some tough performances from his own players. Unfortunately, though, it was the kind of day when nothing went right for the Dragons. A solid, competitive performance in the first period was let down by one error. Tyler Wong’s misplaced clearance dropped straight for Tomas Hyka in front of the net; the Czech forward needed no second invitation to beat his compatriot Simon Hrubec and open the scoring midway through the frame.

Subsequently the game remained even. The teams traded attacks but rarely created moments of intense danger for either goalie to contend with. Magee came close midway through the second period with a rising shot from close range that went wide of the target, Vyacheslav Osnovin drew a sprawling save from Hrubec late in the frame but in general the game was more of an arm-wrestle than a ballet.

That pattern continued in the third, although as the clock ticked down there was a sense that Traktor was beginning to stifle the game more effectively and Kunlun was running out of time to save itself. Then came a reprieve. Traktor fluffed its lines on the power play, Lukas Sedlak took a needless penalty and the Dragons’ PP delivered a tying goal. Brandon Yip’s pass set up Trevor Murphy; the defenseman took a touch to set himself then smashed home a shot from the top of the circle for his 10th of the season. Traktor claimed goalie interference, but Andrew Miller’s work to screen Stanislav Galimov was first class and there was no question of whistling off the goal. With less than three minutes to play, the game seemed to have been saved.

However, it was a day when nothing would go right. While most in the arena began thinking about overtime, Hyka released Sedlak and the Czech international advanced to score a well-taken goal on Hrubec. With barely a minute left, Red Star had it all to do once again. A last, desperate surge fell short and Yaroslav Kosov scored into an empty net to complete a disappointing evening in the Urals.