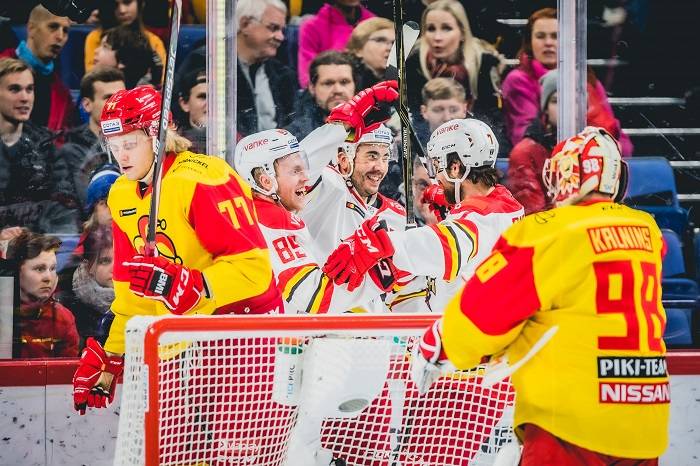 Some losses are more painful than others; and blowing a three-goal lead is about a frustrating as it gets. At times in Saturday’s game in Helsinki, Red Star was hugely impressive; at others, it struggled to cope with the home team. Finally, a late penalty let us down as Jokerit managed to complete a rally from 0-3 to seal a 4-3 victory in regulation and leave the Dragons without even the consolation of a point.

The opening stages were encouraging. Brandon Yip was at the forefront as Kunlun made a bright start to the Year of the Rat. Our captain had a hand in all three goals, taking his tally for the season to 30 (14+16) points as we moved to a 3-0 lead. Yip opened the scoring himself, ghosting in at the back door to put away Hunter Shinkaruk’s feed in the ninth minute. Then he was involved as the Dragons converted their first power play of the night late in the opening frame, the puck looping over Janis Kalnins’ shoulder after Ryan Murphy’s shot deceived the goalie.

Shortly after that, Ethan Werek dinged the piping, but a third goal wasn’t long in coming. Early in the second Yip’s feed for Vic Bartley saw another goalbound shot as the Dragons took the lead to 3-0.

However, that comfortable cushion did not last long. Simon Hrubec took a delaying the game penalty and Jokerit got off the mark on that power play. Teemu Eronen’s point shot found the stick of Jesse Joensuu, and that took the puck away from the Czech goalie to make it 1-3.

The third period began with Mika Niemi bringing it back to a one-goal game, but subsequently Red Star resisted, keeping the home team at bay for more than 10 minutes and raising hopes that the visitor could hold on and close out another vital victory. However, Jokerit has form for late comebacks. Just two days earlier against Admiral, the Finns grabbed a tying goal in the last minute before claiming a 4-3 verdict in overtime. Here, they repeated that scoreline but completed the win inside 60 minutes.

Mikko Lehtonen was the key man. With five minutes left, his shot from the blue was deflected into the path of Joensuu, who potted his second of the game to tie the scores. Then, after a penalty on Devante Smith-Pelly, the defenseman fired home the game winner from the point. Former Dragon Veli-Matti Savinainen screened Hrubec, denying our goalie a good view of the shot and helping Jokerit to victory.

Thus, our problems in Finland continue: four games in Helsinki have brought four losses, and from eight match-ups in total against Jokerit, Red Star has just one win. In the playoff race, our team drops one place following Salavat Yulaev’s win over Barys, while Admiral’s shoot-out success in Riga cuts our advantage over the ninth-placed team to five points. Monday’s trip to Spartak offers a chance to collect more points in our push to remain in the all-important top eight.