As China celebrates the dawning of the Year of the Rat, our Dragons are on the road. Three games in the coming week take Curt Fraser and his team to Helsinki, Moscow and Chelyabinsk as our path towards a playoff place continues. 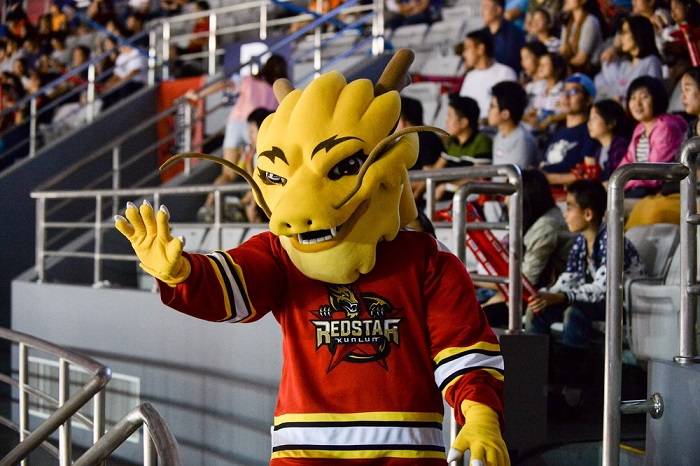 Last time out: The Finns came to Beijing in November for a game that saw Ryan Sproul get his first goal for Red Star. However, Jokerit took a 3-2 verdict to make it five consecutive victories over the Dragons.

Familiar faces: Veli-Matti Savinainen, who played for Red Star last season before going on to help Finland win the World Championship, is now at Jokerit. He has 15 (7+8) points this season from 32 appearances. Our forward Olli Palola played for Jokerit in 2017/18, compiling 24 points in 50 regular season games before grabbing six goals in 10 playoff outings.

Background: The Chinese Year of the Rat dawns with our Dragons on the road in faraway Finland. According to Chinese mythology, rats are blessed with good fortune and tend to be successful, so this could be the perfect opportunity to reverse an unhappy recent trend. Red Star has never won a game in Helsinki and has lost its last five meetings with Jokerit after grabbing a 6-3 verdict on home ice in January 2017. That victory helped take our team to its only playoff appearance, something we’re aiming to achieve once again in the Year of the Rat.

There are more down-to-Earth reasons to anticipate that our guys could take something from this trip. Jokerit is more or less assured of a playoff place but has little hope of rising to the top of the Western Conference. As such, recent results have not been all that intimidating. True, Thursday brought a victory at home to Admiral. However, Lauri Marjamaki’s team was just 26 seconds away from defeat in that one, following heavy losses against SKA and Barys in its previous two games. Severstal, struggling in the West, also skated to a big win when the teams met in Tallinn as part of the KHL World Games series earlier this month.

Jokerit’s leading players in recent games are all familiar names. Peter Regin has been a leader of the Finns’ offense for several seasons, Sami Lepisto – scorer of that late tying goal against Admiral – has previous when it comes to scoring on us.

Last time out: When we met in Beijing in December, an overtime goal from Trevor Murphy snapped a 3-3 tie and gave Red Star the verdict. It had the same impact on the series overall; previously the teams had met six times and won three apiece.

Familiar faces: Swedish defenseman Tobias Viklund has enjoyed two spells with the Dragons. He was part of the defense in our debut campaign, helping Vladimir Yurzinov’s team to the playoffs. Then he returned last season during our defensive injury crisis, making another 30 appearances. This season he has played just 10 times for Spartak since joining the club in November, with injury taking its toll.

Background: When much-titled head coach Oleg Znarok returned to the KHL and took charge at Spartak, it was one of the talking points of the summer. And the Olympic champion has delivered. After several seasons of battling to get into the playoffs, this year’s Red-and-Whites are in a three-way battle with Jokerit and Dynamo Moscow to take a top-four finish and start post season with home ice advantage.

Along the way there have been some impressive wins. Three times, Spartak has got the better of SKA, one of Znarok’s former clubs. There was also a memorable derby triumph at CSKA in November and a shoot-out win at Avangard early in the season. However, consistency has been an issue, with losses against Dinamo Minsk and Dinamo Riga, not to mention a painful 3-9 reverse against CSKA in the first Moscow derby of the season.

The current Spartak team feels like something of a work in progress. There are signs of Znarok stamping his traditional authority on his charges and creating a team that can challenge all-comers. But there is also evidence that, at present, this time can be beaten.

Last time out: The teams met twice in Shenzhen at the start of the season and collected one win apiece. Both games finished 2-1, the Dragons won the second thanks to goals from Tyler Wong and Brandon DeFazio.

Background: Traktor is currently battling with Amur to escape the foot of the table; the Chelyabinsk club is unlikely to make it to the playoffs this season despite retaining a mathematical possibility of a top-eight finish. In a disappointing campaign, the performance of Czech imports Tomas Hyka and Lukas Sedlak has been the bright spot. The pair are on a productive streak at the time of writing – Hyka has contributed in the last five games, Sedlak in the last four – and it’s not surprising that they lead Traktor’s scoring this season.

However, the team as a whole never managed to generate much momentum. Apart from a three-game winning streak in December, Traktor has been unable to string together any kind of sequence. On occasion, the opposite has been the case, with a run of losses pushing the team back down the standings. That inconsistency cost Peteris Skudra his job at the start of November; since then Yurzinov has grappled with the same problem but struggled to find an answer. The departure of leading players such as Fyodor Malykhin and Alexei Kruchinin in December suggested that the club accepted the playoffs were unlikely this season and is already building for the future.

That doesn’t mean, though, that Traktor can be taken lightly. Chelyabinsk is a city that demands a strong team and even this season’s struggles have allowed for some highlights. A recent 2-1 win over local rival Metallurg shows that there is quality in the Traktor roster, however inconsistently it emerges.