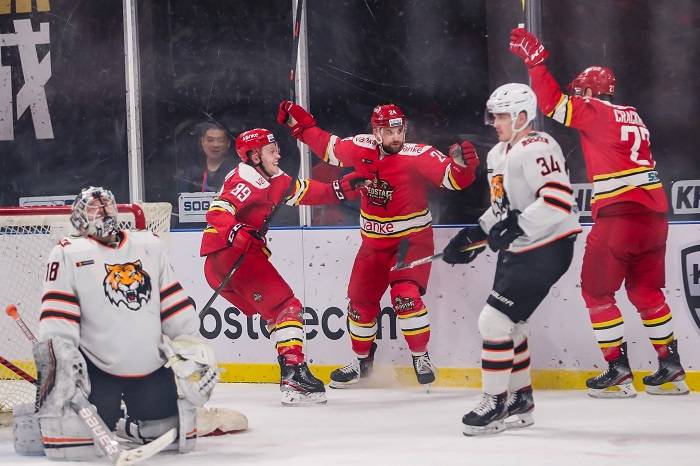 The Dragons made it back-to-back wins over Amur, battling back from 0-2 down to produce a repeat of yesterday’s 4-2 scoreline. The success makes it three wins in a row for our guys, and makes the league table much more comfortable. Currently, Red Star sits in sixth place in the East with an eight-point gap to Admiral in ninth. True, the Sailors have games in hand on our guys, but a good couple of days in Beijing puts the pressure on the chasing pack in this season’s race for the playoffs.

Amur, meanwhile, knew that its faint hopes of reaching the top eight demanded a good result today. The visitor got off to a good start and two power play chances tipped the balance in the Tigers’ favor early on. Vladislav Ushenin was twice the architect as Dmitry Korobov and Alexander Gorshkov gave Amur a two-goal lead with the second period barely underway.

However, we all know that this Red Star team is never lacking in character. Midway through the game, the fightback started. Tyler Wong and Spencer Foo started a break down the left; Foo’s backhanded pass slid under an Amur stick and Luke Lockhart arrived at the back door to claim his 10th goal of the season. Before the intermission, Gilbert Brule tied the scores on the power play, adding to the PP tally he potted 24 hours earlier. Brandon Yip, who claimed a hat-trick of assists yesterday, got another one here; his shot was turned around the post by Evgeny Alikin but the goalie had no chance when the puck rebounded for Brule to slot home from a tight angle.

Early in the third period, Amur had two good chances to take the lead. However, Jeremy Smith was equal to the challenge, stopping another attempt from goalscorer Gorshkov before snuffing out Hynek Zohorna’s one-on-one after the Czech forward intercepted a wayward clearance on our blue line.

It was starting to feel as if the next goal would be decisive, and so it proved. Adam Cracknell broke the deadlock with five minutes left to put Kunlun in front for the first time, and there was no coming back for Amur. Alikin was left frustrated when he allowed our forward’s shot from out on the boards to sneak through him and into the net; Cracknell and his colleagues were overjoyed to gain a crucial advantage in the game.

Cracknell added a second into an empty net with four seconds left on the clock, moving him to 10 goals for the season and ensuring a repeat of yesterday’s 4-2 scoreline. The bigger picture is also encouraging. As the Dragons prepare for their next road trip, which starts on Saturday in Helsinki, they have 57 points and sit on a three-point cushion in sixth place. With nine games of the regular season left, our playoff destiny is in our own hands.