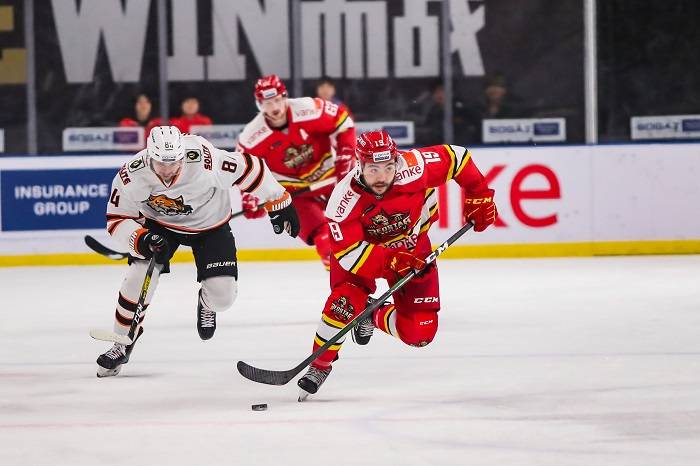 Not everyone is at his freshest after a long-haul flight. And after a weekend getaway in Moscow, 3,600 miles from Beijing, most people would fancy a day off to recover. But Dragons are made of sterner stuff. Our captain, Brandon Yip, not only shrugged off the jetlag in order to rejoin the team immediately after his trip to the KHL All-Star Game, he also collected three points in his 150th KHL outing and pulled the strings in a vital home victory.

Tuesday’s game against Amur was an important chance to consolidate Red Star’s position in the playoff places. At this stage of the season, in a neck-and-neck race for the top eight involving fully half a dozen teams, every point is crucial. And today, with two of the teams below us going head-to-head, a win makes a huge difference to the whole picture.

The success wasn’t just down to Yip’s contribution. Goalie Simon Hrubec also had a big role to play, making some big saves in the early part of the game. He denied Alexander Gorshkov in a one-on-one situation with the scores still goalless and after he was beaten by Hynek Zohorna – another player stepping off the plane back from Moscow – our Czech netminder continued to impress, particularly in a second period where he stopped 18 shots as Red Star turned the game around.

And what of Yip? He began by creating the tying goal for Hunter Shinkaruk in the 15th minute, bursting down the left channel and flipping a backhand pass to the back door where Shinkaruk was waiting unmarked. The Dragons had some help from a former team-mate on that one, with Ondrej Vitasek sitting out a penalty as our power play clicked into gear.

And Vitasek was on the sidelines again midway through the second period as Red Star made it 2-1. This time, Yip fired the puck into the danger zone and as it ricocheted around, Gilbert Brule was on hand to steer it into the net. The middle session ended with a third goal, this time from Brandon Magee. This time Vitasek was on the ice but his misfortunes continued as our 25-year-old used him as a screen to claim his first goal in the KHL.

Yip’s third helper came at the start of the third period, sending the puck to Shinkaruk behind the net. Amur’s defense was out of position and that enabled Jake Chelios to find plenty of space in the circle and rifle home Shinkaruk’s feed to make it 4-1. That was more or less the end of the Dragons as an attacking force. With the game under control, all that remained was to soak up the remaining Amur pressure and close out the victory. There was still time for the Tigers to get nerves jangling. A late double power play saw the visitor swap Alikin for another skater and that 6-on-3 advantage brought a goal for Pavel Turbin and allowed the visitor to continue on the power play in search of another marker. But the clock was always against Amur and a 4-2 scoreline was enough to give Red Star the verdict.

And what of that packed schedule we mentioned at the start? Well, that’s still very much in place. Our next game brings an immediate rematch with Amur in Beijing tomorrow.