The All-Star break put a gap in our run of five home games. But following that 3-1 win over Ak Bars last week, we’re back in action at last with two games against Amur as Curt Fraser’s team looks to consolidate its place in the top eight. And with the race for a playoff place entering the final laps, it’s the perfect time to improve on an indifferent record against our closest geographical neighbor in this league. 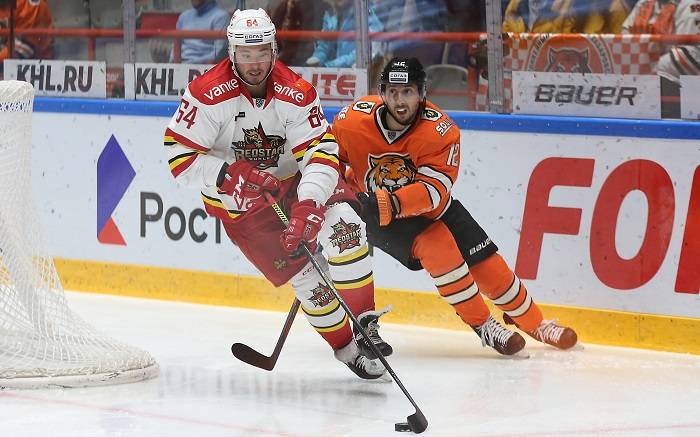 Last time out: We’ve met twice in Khabarovsk this season, and both games ended with a 3-2 scoreline. In October tigers got the better of dragons but in December Olli Palola’s third-period goal ensured sweet revenge.

Familiar faces: Two Amur players have had spells in the Dragons’ lair. Czech defenseman Ondrej Vitacek played with us last season, collecting 16 (3+13) points from 43 games. And, much earlier, forward Igor Velichkin played a role in our inaugural season. The latter has not scored a goal in the KHL since then and serves as a fringe player at Amur.

Background: After that morale-boosting victory over Ak Bars, the Dragons climbed up to sixth in the Eastern Conference and, perhaps more importantly, opened a four-point gap to Admiral down in ninth. The fly in the ointment, though, is that our guys have played more games than their immediate rivals in the playoff race. Thus, it’s crucial to take maximum advantage from the remaining 11 games this season, especially at home and especially against teams below us in the rankings.

Back-to-back games against an Amur team that dropped to the foot of the Eastern Conference following a run of seven straight losses look like an ideal opportunity to pick up more much-needed points in our push for a top-eight finish. However, appearances can be deceptive. In a tight league, Amur’s eight-point gap to Salavat Yulaev in eighth is close enough to persuade the Khabarovsk team that it still has a genuine chance of featuring in post season. Unlikely, perhaps, but not impossible.

Recent form also suggests that Amur has not given up on this season. Sure, seven losses would be the headline figure, but the last three of those games went to shoot-outs – hardly the performance of a team cruising to the end of the campaign. And that was achieved without leading scorer Tomas Zohorna, whose injury also caused him to miss out on joining our own Brandon Yip at the All-Star Weekend in Moscow.

So, while Red Star can and must view these games as a great opportunity to boost our position in the playoff race, you can be sure nobody at the club will be taking Amur lightly when it comes to Beijing this week.