Representing China at the All-Star Game 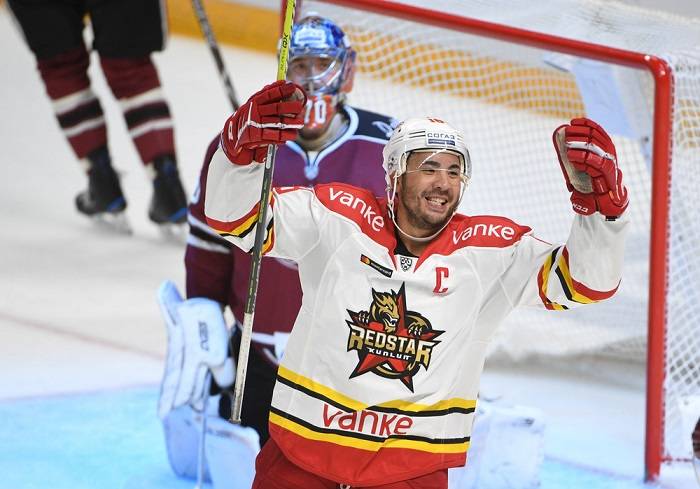 There’s no KHL action this weekend. At least, not in the championship. But in Moscow, the 12th All-Star Game is taking place, the highlight of a weekend extravaganza of hockey entertainment. For the league’s top players, it’s a chance to unwind a little, step away from the stresses of the race for the playoffs, and play some hockey just for fun.

This year, the Dragons are represented by Brandon Yip. Club captain, record scorer, more appearances than any other player; he’s undoubtedly a worthy choice. And he’s also poised to make a little bit of history as the first Chinese player to feature in the show. Red Star has All-Stars from previous seasons – Chad Rau in our first year, Magnus Hellberg in our second – but this is the first time our team will be represented by a player involved with the country’s national program. Before the action, we caught up with Brandon for a quick chat about the grand event.

Is this your first time at an All-Star Game?

In pro hockey, yes. I played a few in Junior hockey, but that’s already so long ago. It just goes to show you never can tell, life’s full of surprises. You can’t guess what’s coming next, and that’s great!

Yeah, I kinda guessed that might be the case because we haven’t been in the league all that long. Of course, I’m proud to represent China and make a little bit of history. I hope I can go there and make a good impression.

I guess you would have followed plenty of All-Star events in the past, maybe in the NHL?

That was a long time ago as well, but I used to love it when I was a kid. It was great to see all your favorite players on the ice together, and it was good to watch their tricks and try to learn from them. I’d watch, then try to copy. It was a really good exercise for a young player.

And what have you heard about the KHL All-Star Game? I guess Magnus Hellberg had plenty to say about it when he played.

Oh, yeah. Magnus came back really impressed. He brought us a bunch of souvenirs and told us all about how much fun it was. Not just the hockey, but the atmosphere, the chance to get to know some of the other guys who usually we only see on the ice. He was really pleased to be a part of it, just like I am. I’m sure it’s going to be great.

Have you decided what you’ll be doing in the Skill Show?

Not yet, but I’m ready for anything. Although I’d prefer to sit out anything where you need to skate fast! I had a bit of a knock recently and I don’t want to risk another injury. Plus I don’t want to embarrass myself – there’s a lot of really fast guys in this league and I don’t know if I can keep up with them!

And of course, there’s always a chance to improvize something a bit different, like our former team-mate Mathew Maione and his singing last year.

Maybe I could dance, but I don’t think anyone would want to hear me sing. Mathew’s the boss at that. And we have some other guys who can play the guitar and sing; Olli Palola, Gilbert Brule. So that’s for them, but not for me. So we’ll work it out as we go. Whatever happens, I’m sure it’s going to be a lot of fun.

And while there’s a lot of fun, the format changed a couple of years ago. Instead of an exhibition game with goals on every attack, now there’s a mini-tournament with winners and losers.

Yeah, I like that. It keeps a competitive element and makes it more interesting. But hopefully we won’t see guys playing so hard that people get hurt.