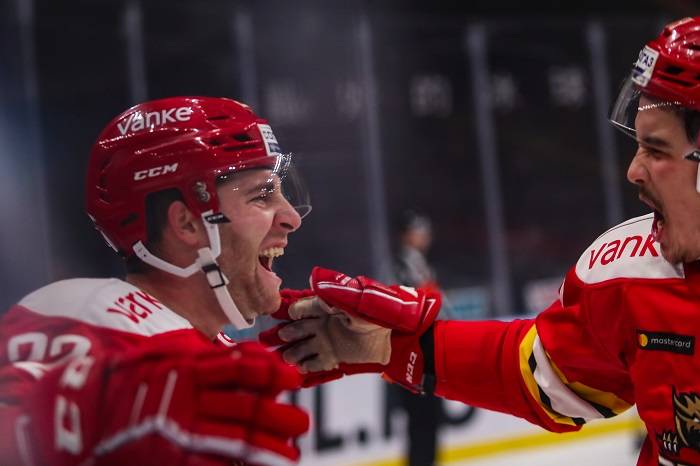 The Dragons faced a tough challenge. After back-to-back losses against Sibir robbed our team of the chance to consolidate its place in the top eight, the visit of Eastern Conference leader Ak Bars threatened to give us another difficult day on the ice against one of the most powerful teams in the KHL.

Happily, there was a boost even as our game started: the news from Vladivostok was good, with Avangard defeating Admiral and ensuring that our rival from the Far East would not be able to catch Red Star today, regardless of the result in Beijing. More importantly, it meant that a victory against Ak Bars would put clear blue water between ourselves and the Sailors.

The portents were mixed. Our previous meeting this season – the first time Kunlun faced an Ak Bars team coached by Dmitry Kvartalnov – ended in an ignominious 0-5 loss. But the last time the Tatars travelled to China, Red Star prevailed 3-0. Similarly, the visitor’s recent form was patchy: a shoot-out win at Amur came after heavy losses against Admiral and Torpedo. There were definitely grounds for optimism.

However, discipline would be key to getting anything from the game. These two teams had compiled more PIMs then anyone else in the KHL and the players that managed to stay out of the box would be well-placed to reap the rewards of maintaining their control. So, it was unfortunate that Red Star found itself two men down early in the game, enabling Mikhail Glukhov to give Ak Bars the lead after seven minutes.

The visitor was eager to shoot whenever plausible – and sometimes when it wasn’t. Although the teams spent similar amounts of time on the attack, Ak Bars topped the shot count 20-7, firing in the puck at any opportunity. Jeremy Smith was kept busy in the home net, but produced a typically solid display to keep our team in the game.

Ak Bars continued to apply the pressure in the second period. Smith had to be alert to stop Zhuravlyov early in the frame, then a Stepan Sannikov raid saw the goalie save Trevor Murphy’s blushes. Our defenseman got his stick to Sannikov’s pass, preventing a shot from Kirill Petrov but inadvertently diverting the puck goalwards. Smith was well prepared, though, and there was no ‘friendly fire’ incident to slow our progress.

Then, at the end of the second period, everything was transformed. Two goals in precisely 30 seconds turned the game on its head and put Red Star in front. First came Adam Cracknell, pouncing on a misplaced pass from Petrov and charging up the ice to shoot past Timur Bilyalov on the stick side. Then it was Murphy’s turn, joining the rush to take a pass from Tyler Wong and squeeze his shot down a narrow shooting line between defenseman and goalie.

In the third, as expected, Ak Bars looked to ramp up the pressure once again. It was time for some full-on defense to keep the visitor at bay, without almost no respite at the other end of the ice. Indeed, prior to the final seconds, Red Star had managed just one shot on target in the frame. The second, launched by Gilbert Brule deep in his own territory, skittered into the empty net with one second left on the clock to seal another memorable victory over one of the biggest names in the game.

Victory opens a four-point gap over ninth-placed Admiral – a handy advantage to defend as the race for the top eight approaches its final stages. Between now and the end of the regular season, the Dragons have 11 games to play as they look to secure a post-season spot for only the second time in the club’s history. The next chapter of the story unfolds in Beijing on Tuesday, at home to Amur.