A night of fightbacks 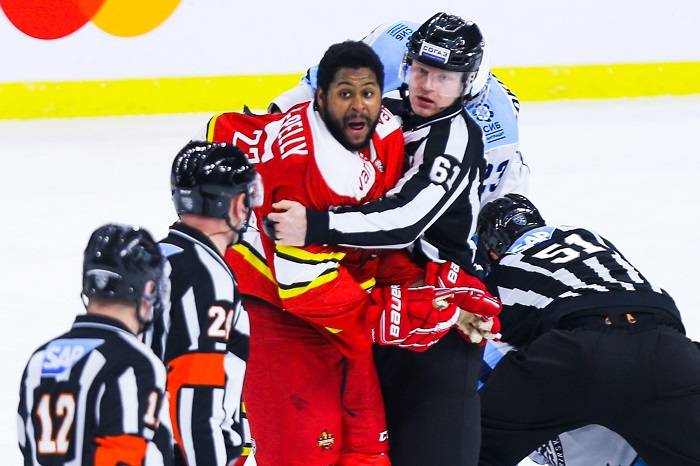 For the second time in two days, the Dragons were rocked by late Sibir goals as they dropped another tight verdict against our Chernyshev Division rival. Another high-scoring, absorbing contest looked to be heading Red Star’s way after three goals early in the third period opened a 4-2 lead. But experience shows that Sibir is not a team that can ever be counted out until the final hooter and, sure enough, our visitor produced another fightback to tie the scores in regulation before claiming the win in a shoot-out.

The point taken today keeps the team in eighth place in the Eastern Conference, two clear of Admiral. The next game in Vladivostok comes tomorrow, and a regulation win for the home team against Avangard would push the Sailors ahead of us into the top eight before Thursday’s meeting with Ak Bars here in Beijing. That’s how tight this playoff race is at the moment – every game subtly reshapes the battleground and none of the competing teams can take anything for granted as the season draws to its close.

There wasn’t much to choose between the teams in the first period. Sibir took the lead in the 14th minute through Alexei Yakovlev but it didn’t take Red Star long to tie the scores. Hunter Shinkaruk arrived with a reputation for hard work and his willingness to chase down a lost cause behind the net engineered this opening. He won the puck back and, with goalie Alexei Krasikov scrambling to get back to his crease, picked out Spencer Foo in front of goal. Foo’s shot was on target, Krasikov could not set himself to make the save and after just 48 seconds, Sibir’s lead was extinguished.

The Dragons then dug in on the PK, surviving a double minor on Griffin Reinhart for high sticks that carried over the first intermission. But another penalty early in the second saw the visitor go ahead once more as Yegor Milovzorov potted a power play goal to make it two from two on this trip to China.

Things exploded into life at the start of the third, and Devante Smith-Pelly was absolutely the man of the moment. He tied the scores after haring off on a quick breakaway with Cory Kane and collecting his team-mate’s return pass before beating Alexei Krasikov. Then he turned provider within a minute, forcing a turnover in our end that finished up with Shinkaruk shooting us in front for the first time in the game.

There was more to come: in the 49th minute, Brandon Yip and Adam Cracknell took the battle to Sibir. When the latter brought the puck out from behind the net, he found Smith-Pelly in the perfect spot to fire past new goalie Harri Sateri. A two-goal lead with 11 to play, against a team that was forced to dig so deep 24 hours earlier in a comeback from 0-3. What could possibly go wrong?

Well, Sibir’s battling qualities ensured that the visitor forced its way back into the game. Juuso Puustinen set the alarm bells ringing when he made it a one-goal game just after the midway point of the third period. Then came calamity when Ilya Morozov tied the scores in the 56th minute. The frustration was visible as Morozov found the net after the puck pinballed around Simon Hrubec’s crease.

The Dragons had a great chance to win it in overtime. Curt Fraser’s team dominated the 3-on-3 play from the moment Foo slalomed his way down the ice in search of a coast-to-coast effort. The pressure told, Sibir gave up a too many men penalty, but our guys could not find the key to Sateri and the game went to a shoot-out. Here, again, the Finnish goalie reigned. Shinkaruk scored on him with the first attempt but subsequently Red Star fired blanks and Sibir responded to win it thanks to Milovzorov.