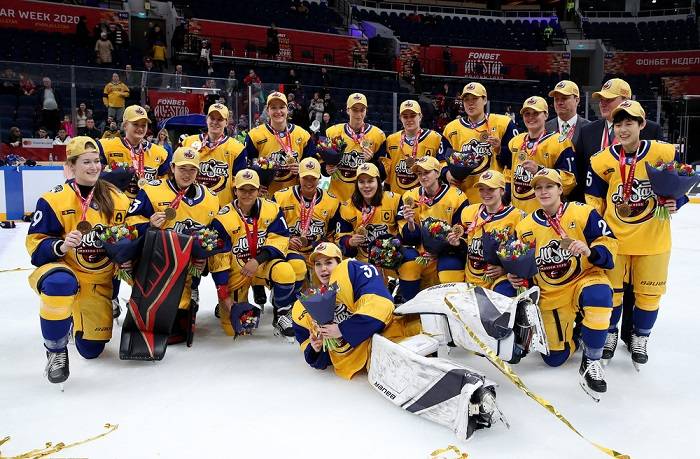 The KRS Vanke Rays were strongly represented in Moscow on Sunday at the Women’s Hockey League All-Star Game. Our head coach, Brian Idalski, was on the staff for Team East in the hockey festival, and goalie Kimberly Newell, defensemеn Qi Xueting and Liu Zhixin and forwards Alex Carpenter, Leah Lum and Rachel Llanes were on the roster.

They all contributed to a 4-1 victory for the East to tie the series at 2-2 against the Western Conference.

The Rays, in their debut season in the WHL, are on course to take second place in the regular season table following their switch from the now-defunct CWHL last over the summer. Not only has the team enjoyed a strong showing on the ice, Idalski and his players are also relishing the status and organization of the competition – something all the more pertinent as the women’s game around the world explores ideas about how to develop sustainable, professional leagues.

Sunday’s All-Star Game attracted more than 3,000 fans to Moscow – a similar number to the Junior Hockey League equivalent on Saturday – highlighting the growing market for the women’s game in Russia and beyond.

And there was high praise from several of the KRS party after Sunday’s excitement.

I thought it was an unbelievable event. Everything was first class; the professionalism, the way the players were treated. For me it was nice to get to know different players and coaches. And seeing the number of international players in the game, coming from China, Slovakia, the Czech Republic, the USA and Russia, made it special. It was a great event.

It’s always fun to win, to get those bragging rights and everything else. The kids played hard and it was a fun game to be a part of. Just experiencing and event like this, being a part of it, is special.

It’s a big thing for women’s hockey. It’s an opportunity to see our players at this kind of level and for young players that’s so important. I really tip my hat to the Russian Hockey Federation and the league for putting on and event like this. Young players can see what’s possible and dream of being a part of it one day. I’m very happy to be a part of it today.

It was a lot of fun, we enjoyed it. We didn’t know what to expect coming in here, but it was a lot of fun. We had a great crowd and we enjoyed ourselves a lot. It’s great to be able to have this in a big city like Moscow and have a lot of people come out. We saw lots of young girls, young hockey players here today. It will help grow the game.

I enjoyed every moment. It’s something you might not get to experience again so we just stayed in the moment and tried to have fun.

It’s cool to see the growth of women’s hockey here so far. It’s definitely important to showcase the talent for fans in Russia. It’s so much bigger here than in the US it seems. It’s pretty fun to be a part of it. I was surprised about the crowd. Didn’t know how it was going to turn out, but Russia seems to have a good following for women’s hockey.

It’s pretty cool that the KHL has so much influence on the Women’s Hockey League. It’s good to see that type of business model and it definitely makes the women’s side more successful.