Head-to-head with a playoff rival

The Dragons go into their first home games of 2020 in need of a lift after a tough time on the road last week. However, despite losing three of those four games, Curt Fraser’s team remains in eighth place in the East, one point clear of Admiral and four ahead of Neftekhimik. Looking up the standings, things remain incredibly tight in the playoff places, with just three points separating us from fifth-placed Metallurg. 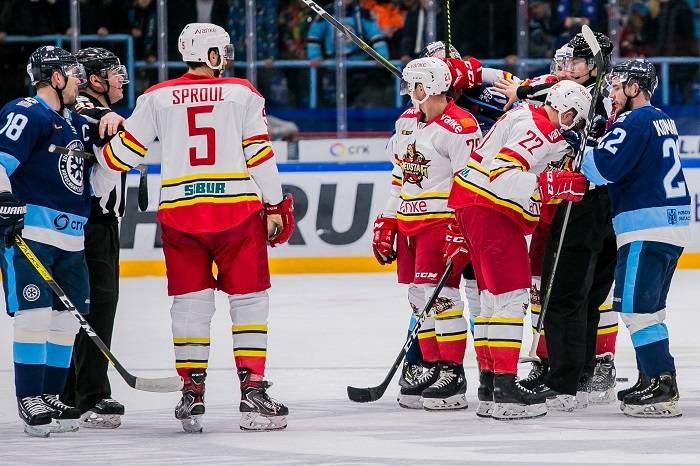 Last time out: We visited Novosibirsk on Dec. 28 and suffered a shoot-out loss after a third-period fightback saw Smith-Pelly and Yip claw back a 0-2 deficit. Overall, Red Star has five victories from nine meetings with the Siberians, and two of our losses came in shoot-outs.

Background: These two games could go a long way to defining our season. Win them, and we put a significant gap between ourselves and a major rival for a playoff spot. Sibir is currently in sixth place, just one point better off than the Dragons, albeit with three games in hand. Nikolai Zavarukhin’s team picked up a couple of useful wins in its last two outings, edging Lokomotiv 2-1 in Novosibirsk after wrapping up a short trip to the Urals with an overtime win at Avtomobilist. However, it’s noticeable that games involving Sibir tend to be tight affairs: two of the last five have gone to overtime, two others were one-goal games and you have to go back to a 0-5 drubbing at home to Spartak on Dec. 25 to find a truly one-sided affair.

Sibir’s big scoring threat comes from its Finnish imports. Mikael Ruohomaa and Juuso Puustinen lead the team in scoring, with Jukka Peltola fourth among the forwards. Defenseman Jyrki Jokipakka is also making a handy contribution with 21 points from the blue line. Youngster Nikita Shashkov, a highly-rated prospect when he made his KHL debut last season, is also back on the scoring trail. His goal against Lokomotiv was his first of the season following a recall from playing VHL hockey in Uzbekistan.

Back-to-back games against Sibir have a bit of pedigree. What about the unforgettable scenes in Shanghai last year, when Olli Palola scored twice in the last 15 seconds to complete a stunning fightback from 1-5 down and force overtime. The Finn got the first ever hat-trick by a Red Star player in that game, a feat matched by Brandon Yip 24 hours later in a 4-2 Kunlun win.

Last time out: Our trip to Kazan in September ended in a 0-5 loss, but the last meeting between the teams in China was much more encouraging, with Red Star recording a 3-0 victory in October 2018.

Background: Dmitry Kvartalnov’s team has been at the top of the Eastern Conference table all season, but recent results suggest some vulnerability among the high flyers from Kazan. Sunday saw a heavy 1-5 loss at Admiral, which came on the back of a 1-4 home defeat against Torpedo. Indeed, it’s six losses from 10 for Ak Bars, far from championship form.

That’s not to say the team can be taken lightly. Vladimir Tkachyov, Ak Bars’ leading scorer in games against Red Star, might have made a surprise departure on deadline day, but there’s still an impressive arsenal of scoring talent here. Danis Zaripov’s experience and cunning makes him a leader on an off the ice, Justin Azevedo recently collected his 200th assist in the KHL and both Patrice Cormier and Kirill Petrov have cleared 20 points this season. However, it’s striking that the leading scorers are both defensemen – Mikael Wikstrand and Albert Yarullin have 24 and 23 points respectively to top the charts on a team that relies on depth more than one outstanding offensive partnership.