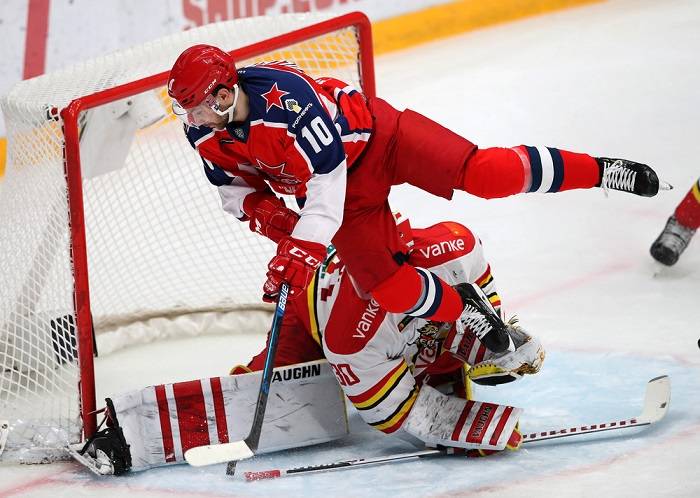 Traveling to the defending champion is always a tough ask. Doing it at the end of a gruelling road trip, more so. And seeking compete with the strongest team in the league after allowing a goal in the first minute is, arguably, all but impossible. Unfortunately, that’s exactly what Red Star had to do in Moscow on Friday evening.

The pre-game plan was to keep things tight, frustrate the opposition and look to build the pressure as time passed. But that plan did not factor in Kirill Kaprizov. CSKA’s young forward is capable of dismantling any opponent and today he struck after just 55 seconds. Once Anton Slepyshev found the 22-year-old in ample space inside the face-off circle, there was only one outcome. The puck flew into the net, Kaprizov had his 100th regular season KHL goal, and the Dragons were firmly up against it.

To the team’s credit, nobody buckled. Despite a tough examination in the first period, Kunlun kept trying to execute the game plan and managed to limit CSKA to that early goal. Simon Hrubec produced another eye-catching display – he would finish the game with 28 saves and plenty of credit for his efforts under fire – but, in truth, it was a struggle to bridge the gap in class between the teams on the night.

That’s not to say there weren’t chances to change the script. Late in the second period, with the score still at 1-0, Hunter Shinkaruk burst forward and slid a teasing pass across the face of goal. Lars Johansson was unsure whether to twist or stick and had Griffin Reinhart’s stick got an inch further up the ice he might have diverted the puck into the net.

Instead, the Army Men went into the second intermission with a 2-0 lead. Kaprizov was the scorer again, just six seconds before the break. That was a bitter blow to the team’s morale; worse was to come early in the third when Kaprizov turned provider and Slepyshev made it three.

Hrubec continued to impress, coming up with a huge pad save as Maxim Sorkin looked for a short-handed goal. At the other end, Johansson also made a big stop to shut the door on Brandon Yip’s breakaway chance and secure his fifth shut-out of the season.

The game in Moscow marked the end of our toughest road trip of the season. In three of the four games we faced real powerhouses of the Western Conference – including the current top two in that section – and struggled to generate the offense necessary to compete. However, the convincing victory in Minsk ensures that the Dragons remain in the top eight as they fly back to Beijing for next week’s action against Sibir and Ak Bars.