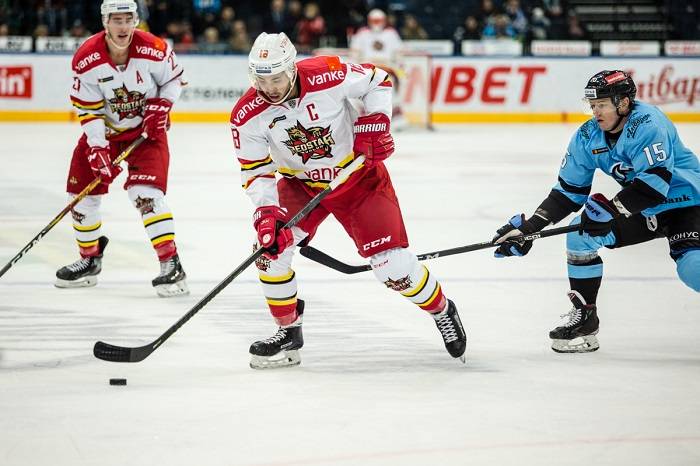 After two games without a goal, the return of captain Brandon Yip was a big boost for Red Star. The 34-year-old missed our first two games of 2020 and that put a noticeable dent in our offensive potential. He joined Adam Cracknell, himself making just his second appearance since an injury in early December, and Brandon DeFazio on the third line.

And Yip made a scoring return to help Red Star snap its four-game losing streak and post a second victory over Dinamo in the space of a couple of weeks. The win moves the Dragons up to sixth in the Eastern Conference, while denying Minsk the chance to climb above Riga at the foot of the KHL table.

Our captain had the first big chance early in the game when he tested Mikhail Karnaukhov on the wraparound in the first few minutes. However, the wait for a goal was destined to continue until the intermission as Minsk picked up the pace and had the better of the opening period.

When goals are hard to come by, the best solution is to work hard. And it was the Dragons’ willingness to battle, to chase down lost causes, to hassle and harry the home defense, that paid off impressively in the second period. Looking to press Dinamo in its own zone even on the PK, Kunlun forced an awkward clearance from home goalie Karnaukhov and Luke Lockhart won the puck and opened the scoring.

Then another enforced error saw Kirill Gotovets cough up the puck for Yip and our captain marked his return to the team with another goal. That made it 2-0 and brought up 20 points this season for Yip. More importantly, two goals in 88 seconds gave our guys a strong grip on the game.

Naturally, Minsk was eager to chip away at that lead. Artyom Demkov reduced the deficit – former Dragon Marc-Andre Gragnani had an assist on that one – and Simon Hrubec showed his class late in the frame to keep the lead intact. First, our Czech goalie made a big save to deny Ryan Spooner, then he closed the door on Francis Pare when the Canadian thought he had a simple finish into the open corner of the net.

In the third period, Hrubec kept up his fine form. A home power play put our defense under pressure, but the Czech stoned the Dinamo offense and completed the PK with a pad save to frustrate Shane Prince. After winning the face off and returning to full strength, Red Star went down the ice on the counter and Cracknell gave Karnaukhov something to think about at the other end.

Then Yip potted his second of the night, opening a 3-1 lead and pulling Dinamo’s hopes of a fightback out from underneath the home team. Hunter Shinkaruk’s shot was redirected by Cracknell; Karnaukhov made the save but Yip was on hand to gobble up the rebound and claim a real gamebreaker of a goal.

Shinkaruk’s assist was his first point in the KHL and our most recent signing didn’t have to wait long for his first goal. Once again, the Red Star forecheck put the Minsk defense under pressure. The puck went to Ethan Werek and when his shot was saved, Shinkaruk was perfectly placed to scoop home the rebound. Our Hunter got a first taste of his prey in this league.

By now, our guys were rampant. And there was time for one more goal as Tyler Wong completed a big win by converting Ryan Sproul’s pass and making it 5-1. Goal drought? What goal drought!