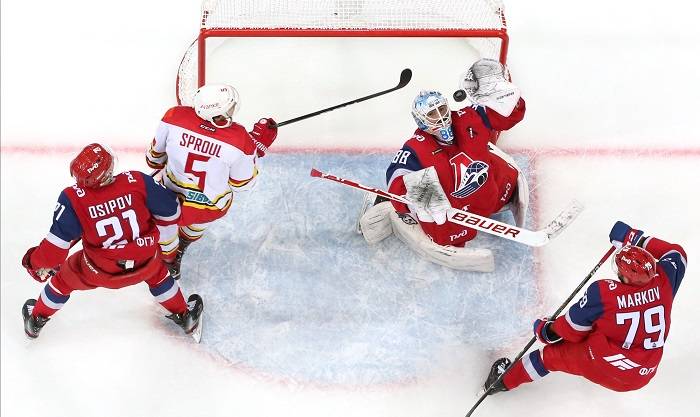 One of the most frustrating features of Red Star’s game last season was an all-too frequent collapse in the second period. Often, the Dragons made a solid start to a game but faded after building those promising foundations. This season, for the most part, the same problem has not been visible but unfortunately it returned on Sunday in Yaroslavl.

There was nothing at all wrong with Kunlun’s start in this game. The early exchanges saw plenty of dangerous moments for ex-Dragon Alexander Lazushin to contend with. Brandon DeFazio was close to opening the scoring in the fourth minute on an odd-man rush, a Jake Chelios slap shot was deflected just past the post and Cory Kane was denied by the piping when he got clear in search of a short-handed goal. True, Loko hit the post at the other end through Maxim Osipov, but nobody could argue that Red Star was good value for at least a share of the points after 20 minutes.

But it all went wrong after the intermission. Following a competitive first-period performance, Red Star was eclipsed in the second as Loko found three unanswered goals. The first was particularly painful. Roman Savchenko slung the puck hopefully towards the net from the boards and struck lucky as it bounced between goalie Jeremy Smith and defenseman Trevor Murphy before looping into the net.

The second hurt for different reasons. Goalscorer Pavel Kudryavtsev was given far too much space in front of the Smith’s net and did not have to work hard enough to convert Denis Alexeyev’s pass from the corner. Suddenly, Lokomotiv was on the charge. Smith pulled off a good save to deny Artyom Ilyenko but could only delay the inevitable. Ilyenko himself added Loko’s third in the 36th minute, taking the game away from the Dragons. The best chance for our guys came late in the frame when a power play eased some of the pressure. Hunter Shinkaruk’s perceptive feed sent Ryan Sproul in on goal but his shot was stopped by Lazushin before the home goalie added a crowd-pleasing dive to pounce on the loose puck.

Getting a goal back then might have changed the whole game going into the third period. As it was, down 0-3, there was little to encourage the belief that we could hit back. The final frame was not as one-sided as the middle stanza but by then the damage was done. Lokomotiv knew it could simply protect its lead – and it did, very effectively – and wait for chances at the other end. When they came, the home time knew how to take them. Savchenko got a more conventional goal to make it 4-0 before Artur Kayumov completed the scoring and ended an unhappy afternoon for our guys.

Thus, the Dragons were handed a heavy defeat despite heroic effort from Smith who made 35 saves. On the other end, Lazushin earned his second successive shutout having dealt with 24 shots. Once again, though, there’s no time to dwell on today’s disappointment. The schedule is relentless and Tuesday brings yet another game. Minsk is the next destination, Dinamo the next opponent. On Christmas Day we beat the Bison 2-1; as the last decorations come down, can we repeat that success to get our first points of 2020?