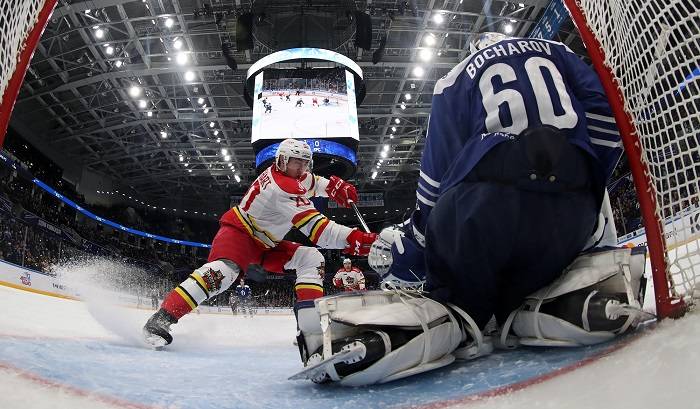 The Dragons were denied by Dynamo goalie Ivan Bocharov in a battling performance in Moscow. The 0-2 scoreline was hard on our guys and the efforts of our forwards – especially in the third period – deserved better than Bocharov’s 26 saves would allow.

There was bad news for the team before the start with Brandon Yip unable to take his place on the roster. Our captain was absent in Moscow due to a minor injury, meaning Vic Bartley wore the ‘C’ in his place. Andrei Maximov returned to the team, and Curt Fraser reshaped his lines in search of a scoring combination in the Russian capital.

It didn’t quite work out. There was no shortage of scoring chances, but goals just would not come. Sometimes, it was down to the skills of Bocharov: a slight touch to take away Andrew Miller’s first-period effort after Hunter Shinkaruk presented his strike partner with a great chance; a stop under pressure in the third, denying Andrej Sustr as our forwards buzzed around the net without getting the all-important touch. Other times, poor finishing cost our forwards: Shinkaruk will wonder how he put the puck wide of an open net in the third period when it seemed that Bartley’s set-up had delivered the Canadian’s first goal in the KHL. Even the frame of the goal was on the host’s side when Miller dinged one off the bar late in the middle frame.

At the other end, Simon Hrubec also performed strongly. The Czech frustrated Teemu Pulkkinen in the first period and robbed Andrei Alexeyev with an outstretched skate while the scores were goalless. However, both players were to get their revenge. Alexeyev opened the scoring with a power play goal midway through the game. The Dynamo PP is one of the best in the league and there was a sense of familiarity as Andrei Mironov launched a shot from the point and Alexeyev stuffed the rebound into an empty net. Pulkkinen, too, profited late in the game, getting his first goal for Dynamo following his arrival from Minsk when he neatly redirected a Michal Cajkovsky shot.

Hrubec kept making the big saves – his block to thwart Andre Petersson in a one-on-one situation sticks in the mind – but Bocharov did the same at the other end to preserve his shut-out and usher his team over the line.

The loss, a third in a row for Red Star, cost the team a chance to consolidate its position in the playoff race. The Dragons are now sixth in the East, dropping behind Metallurg but aided by losses for Sibir and Admiral among their closest rivals for the top eight. And on Sunday we all go again at Lokomotiv, looking to tighten that grip on our key target for the new year.