This year we have a 2020 vision – get to the playoffs! 2019 came to an end with our guys in fifth place in the Eastern Conference, handily positioned in a tight race for the top eight. But there’s no room for complacency: as the teams return to the ice in the New Year, just six points separate Neftekhimik in 10th from our Dragons. As ever, a couple of back-to-back wins or a run of two or three losses can send teams spiralling up and down the charts. So, our New Year Resolution has to be to keep up the disciplined play that lifted Red Star up the table, starting with a four-game road trip that starts and finishes in Moscow. 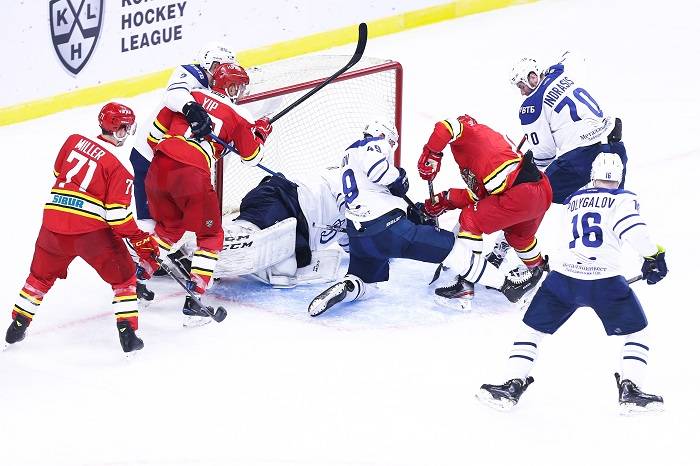 Last time out: Dynamo came to China in October and edged a 2-1 verdict thanks to goals from Vadim Shipachyov and Vyacheslav Kulyomin.

Background: Free-scoring Dynamo boasts the most prolific offense in the KHL, and its top line of Vadim Shipachyov, Dmitrij Jaskin and Andre Petersson has been devastating. Shipachyov is the league’s leading scorer, with 48 (12+36) points in 43 games; Jaskin is right behind him with 43 from 42 and his 19 goals make him the deadliest marksman in the competition. For good measure, Juuso Hietanen’s 30 points from the blue line make him the most productive D-man so far this season. The power play is running at 22% success, bettered only by Avtomobilist and it’s only a couple of weeks since an 8-1 victory over Severstal set a new club record winning margin in the KHL.

It’s better than many expected from the Blue-and-Whites before the start of the season. The departure of Dmitry Kagarlitsky to SKA looked to put a hole in the Moscow offense, while confirmation that veteran goalie Alexander Yeryomenko would play a secondary role this season raised questions about how well Ivan Bocharov would step up as undisputed first choice.

However, this team is not unbeatable. A late wobble saw Dynamo blow a winning position at Metallurg in its last game of the year, and Jaskin will miss this one after getting a one-game ban following his high hit in that encounter.

Last time out: Our first meeting of the season was a nine-goal thriller. Unfortunately, six of those goals went to the visitor. Indeed, since winning our first game against the Railwaymen in October 2016, we’ve lost six on the run against this opponent. Time to get back on track in Yaroslavl.

Familiar faces: Goalie Alexander Lazushin played for Red Star last season, getting 12 wins in 39 appearances. Our defenseman Denis Osipov was on Loko’s roster in 2016/17 before moving to Dinamo Minsk.

Background: When we first met Lokomotiv, the team was under the temporary charge of Alexander Ardashev following the abrupt dismissal of Craig MacTavish as head coach. The echoes of that slow start to the season can still be felt: sixth place in the West is somewhat below expectations in Yaroslavl, even if new chief Mike Pelino has steered the team into a position where it can be fairly confident of a playoff spot.

The Railwaymen start the New Year without exciting prospects Grigory Denisenko and Daniil Misyul, both of whom are on international duty at the World Junior Championship in the Czech Republic. When we take to the ice in Yaroslavl, those two will be suiting up for Russia in the medal games in Ostrava. During the World Juniors, Lokomotiv lost all three of the games it played up to now, although that run includes overtime losses against CSKA and Jokerit.

However, those two are not the only talented youngsters on Pelino’s team. Leading scorer Denis Alexeyev is just 22, and he’s building on a good season last time out to stay ahead of the likes of Stephane da Costa and Anton Lander on the scoring charts. Youthful goalie Ilya Konovalov, meanwhile, has put a shaky start to the season behind him and is reinforcing his status as one of the brightest talents between the piping in the KHL.

Last time out: The Dragons wrapped up a Christmas gift for their fans with a 2-1 victory in Beijing on Dec. 25. Goals from Brandon Yip and Devante Smith-Pelly were good enough for the win.

Familiar faces: It’s shaping up to be a defensemen’s reunion. Ex-Dragon Marc-Andre Gragnani is back in Minsk this season, while our Denis Osipov had a spell in Belarus. Head coach Curt Fraser is also on familiar territory – he coached the Belarusian national team for a time.

Background: A 0-2 loss at home to Dinamo Riga on Dec. 30 meant that the Bison would enter 2020 propping up the rest of the KHL. Craig Woodcroft’s team suffered a club record 12th successive defeat that evening. With no realistic hope of reaching the playoffs, Minsk allowed leading scorer Teemu Pulkkinen to go to Dynamo Moscow on trade deadline day; the immediate future relies greatly on the rapid development of Belarus’ reserves of hockey talent.

It’s a situation that Red Star fans might recognize; Dinamo competes in the KHL with a view to nurturing talent for the national team. That roster, in turn, is getting ready for the 2021 World Championship, to be staged on home ice in Minsk, and needs to improve greatly from the team that slumped to relegation back in 2018. So, the traditional playoff push has been sacrificed this season in a bid to give game time to players who might step up to the national team.

Unfortunately, that’s come at a big price in the KHL. Dinamo allowed 148 goals in 42 games in 2019, by some margin the worst in the league. Pulkkinen’s scoring – he finished the year third in the goalscoring chart – papered over some of the cracks, but could not, on its own, salvage much from a trying season in Belarus.

Last time out: Back in September we suffered a 0-3 loss at home to CSKA, but our last trip to Moscow brought our first ever victory over the Army Men. Two goals from Olli Palola led the way to a 4-3 success in October 2018.

Background: After Minsk, we go from the foot of the table to its summit. The defending champion returned to the top of this season’s table on the final game day of 2019. The Army Men edged past Lokomotiv in overtime – reprieved by a late Jiri Sekac goal in regulation – to go ahead of Ak Bars and take the overall lead.

Igor Nikitin’s team boasts some formidable firepower: Olympic champions Mikhail Grigorenko and Kirill Kaprizov top the bill, but there’s plenty more to come at you if your defense stops them. Swedish international Mario Kempe, a recent signing, adds yet another dimension to a forward line that also includes former Barys hot-shot Linden Vey and Konstantin Okulov, the game-winner against Lokomotiv and scorer of two goals last time Kunlun played here.

As you might expect, that adds up to some serious scoring: only Dynamo Moscow managed more than CSKA’s 124 goals before the turn of the year. The Blue-and-Whites were also the only team to win against CSKA since Dec. 2, highlighting the challenge we will face in Moscow.