Dramatic finish to a good year 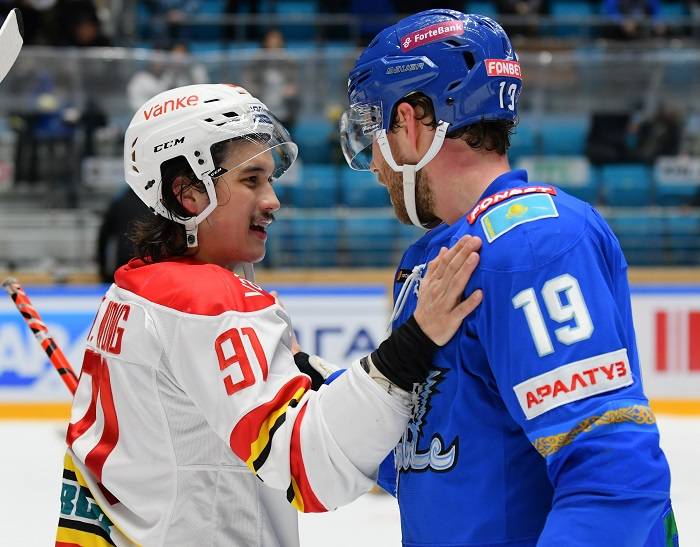 Red Star rounded off 2019 with a 1-2 loss at Barys. Penalty trouble in the first period left the Dragons with too much to do and not even a greatly improved and far more disciplined display in the second and third periods was enough to save the game.

The result means Kunlun has shared two wins and two losses with this Chernyshev Division rival; with the exception of our 5-2 win in Kazakhstan in September, each has been a one-goal game with little to choose between the teams. That highlights the progress made this season, with our team regularly taking points of opponents from the top end of the table.

The Dragons got off to a great start here, taking the lead in the second minute. Tyler Wong turned the play from defense to offense, Griffin Reinhart fired in a point shot and Cory Kane was well placed on the slot to extend his stick and redirect the puck beyond Eddie Pasquale in the home net.

However, if ever there was a game where a team peaked too early, this was it. The rest of the first period was virtually one-way traffic, with Red Star managing just one other shot on goal in the opening stanza. There was no shortage of hard work – Kunlun blocked plenty of shots and delivered plenty of hits – but there was no sign of a way to halt the Barys advance.

Penalties took their toll. Trevor Murphy had barely returned to the ice when Barys tied the game. Roman Starchenko’s shot bounced into the net off Corban Knight’s glove; a video review established that the Canadian’s intervention was inadvertent, and the goal could stand. It wasn’t long before another penalty saw Barys move in front. Darren Dietz fired in a shot from the point, Jeremy Smith made the initial save but the puck got caught in the skates of Brandon Yip and fell kindly for veteran Dustin Boyd to shoot into the open net. Smith also had a couple of big saves to make in the final minute of the frame to keep Red Star in contention.

The middle frame was more disciplined. The Dragons know they have good team when playing five-on-five and largely stayed out of the box in the second period. That brought more scoring chances, the best of which fell to Gilbert Brule. He flashed a shot narrowly wide after Wong put him through on Pasquale.

The third period also saw Red Star on top, but there was still no way past Pasquale. Hunter Shinkaruk came close to potting his first goal in the KHL when he made a nuisance of himself on the slot as the puck bounced crazily in front of the home goalie, but Pasquale recovered to hold on and deny our man an equalizer.

That was as close as Kunlun came to salvaging anything from this final game of 2019, but the defeat here in Nur-Sultan should not detract from a hugely encouraging campaign to date. This time last year, don’t forget, Red Star was on a downward spiral that would see head coach Jussi Tapola leave the club in January as the playoff dream faded. Today, Curt Fraser’s team is in the thick of the race to secure a top-eight finish and, with it, a return to post-season play for the first time since our debut season in 2016. As 2020 begins, Red Star is up in fifth place in the Eastern Conference; the vision of playoff hockey is clear in front of us.