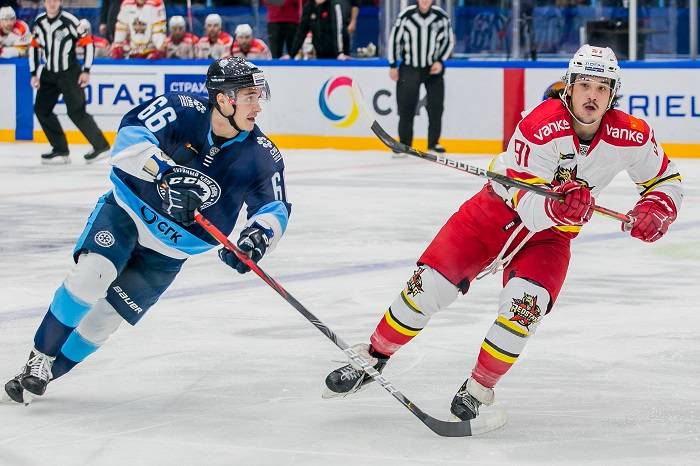 This was the first of four meetings scheduled for our teams in KHL regular championship and it showed what a great entertainment can be expected in the other three. The Dragons fought hard in Novosibirsk to salvage a point thanks to a third-period fight-back. But there was a sense of frustration that the team could not complete the recovery from 0-2 down and take the win in the extras.

Saturday’s game saw Hunter Shinkaruk make his debut for Red Star. The 25-year-old forward completed his move to China ahead of yesterday’s KHL trade deadline after leaving the AHL’s Charlotte Checkers. However, his pedigree is rather greater than an AHL journeyman: in 2013 he was a first-round draft pick for the Canucks and his record in junior hockey was devastating. Given an environment where he can show off his skills in the big leagues, our new acquisition has the potential to be a hugely potent force.

In this game, the first of his career outside of his native North America, Shinkaruk joined Ethan Werek and Devante Smith-Pelly on the third line. In almost 18 minutes on the ice, he had four shots on goal in a busy KHL debut.

However, the story of the early stages was all about the Sibir power play. The home team twice took advantage of penalties on the Dragons to open a 2-0 lead in the first two periods. First, Shinkaruk took a holding minor and just six seconds later Evgeny Chesalin put the home team ahead. That was very much against the run of play in the first period, with Red Star dominating most of the action. Our guys outshot the Siberians 13-6 and spent more than twice as long on offense as our opponent.

But the tying goal just would not come. Even a penalty shot for Andrew Miller ended in frustration as Harri Sateri made the save to reprieve Oleg Piganovich after the defenseman was penalized for throwing the stick.

The second period was more even but, once again, a power play chance made all the difference. This time, late in the middle session, it was Sibir’s Finnish connection to the fore: Jyrki Jokipakka had the assist as Juuso Puustinen doubled the lead.

A two-goal lead flattered Sibir, but the Dragons weren’t done. In recent games, Devante Smith-Pelly has hit a rich vein of scoring form and he was on the mark again midway through the third period to put Red Star right back in contention. Miller brought the play into the Sibir zone, slipped a pass out to Smith-Pelly on the right and the former Washington Capitals man picked his spot from the face-off dot to leave Sateri with no chance.

Then, after scoring on two of its power plays, Sibir allowed a short-handed goal as Red Star tied the game with eight minutes to play. A misplaced pass on offense saw the puck clear the visitor’s zone and Brandon Yip was alert to the opportunity, sprinting away to collect the loose puck and win his one-on-one duel with Sateri.

It wasn’t exactly plain sailing from there to overtime: the Dragons had to kill another penalty, and Simon Hrubec made some smart saves to prevent both Chesalin and Puustinen adding to their earlier goals.

In overtime both teams had chances to win it. Ethan Werek had the best chance for Red Star, denied by the outstretched pad of Sateri. At the other end, a dramatic intervention from Trevor Murphy kept us in the game as he got the rebound away from the net with Hrubec stranded after making the initial save.

However, Red Star finally fell in a shoot-out that mirrored the action of the game. Sibir got 2-0 up but the Dragons tied it up thanks to successful attempts from Shinkaruk and Vic Bartley. However, when Mikael Ruohomaa converted the 10th attempt, Sibir claimed the verdict.

We will soon meet Sibir again, this time in Beijing for back-to-back games in January. Exciting show for hockey-lovers will go on.