The end of the year is in sight – and Red Star goes into its final action of 2019 lifted by Wednesday’s victory at home to Dinamo Minsk. That 2-1 success lifted the team to sixth in the table, well on course for a playoff place. More importantly, it banished the shade of two heavy losses in the previous home games.

Curt Fraser has reinforcements to call upon as well: Hunter Shinkaruk is our latest signing, arriving at the club just before deadline day to add extra options to the forward line. The 25-year-old Canadian was a first-round NHL Draft pick, but never found the right home for his talents in the big league. Now he’s determined to prove himself here in China. 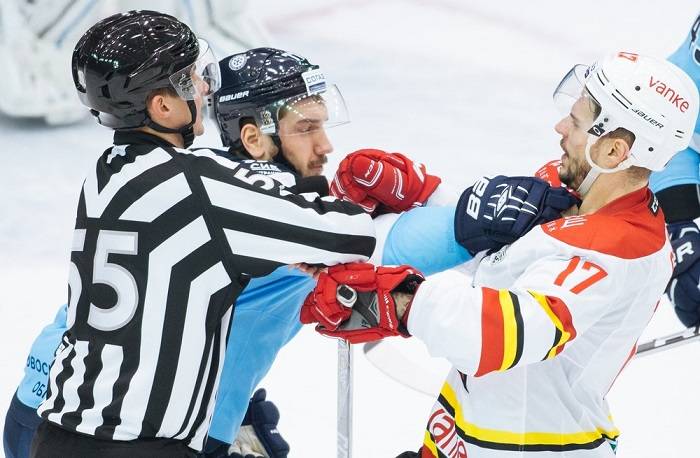 Last time out: The teams met four times last season, with Red Star winning two and taking another to overtime. At the end of November 2018, Red Star won 4-2 at home to Sibir, recording a fifth win in eight meetings between the teams thanks to a Brandon Yip hat-trick.

Background: This is a match-up between two teams in the thick of the playoff race. Prior to puck drop, just two points and one place separate the Dragons from the Siberians, with the winner of this game poised to move up the table.

Sibir’s progress this season has been based around some good defense; with just 90 goals allowed, Nikolai Zavarukhin’s team is one of the more parsimonious in the East – making Wednesday’s 0-5 loss at home to Spartak all the more surprising. However, its offense has not been so powerful, with 86 goals compared to 97 from your Dragons. Indeed, Sibir has not scored in its last two games, including a 0-2 loss to SKA just a day before our meeting.

Much-travelled forward Yegor Milovzorov is enjoying a good season for his hometown team, and he’s been in good form of late with three goals in the last five games. And Sibir’s Finnish contingent also makes its presence felt: Jyrki Jokipakka is the leading scorer on defense, while Mikael Ruohomaa, Juuso Puustinen and Jukka Peltola have 68 points between them this season.

Last time out: Our two early-season meetings in Shenzhen produced one win and one loss, but our first trip to Nur-Sultan this season brought one of the best performances of the current campaign. After conceding two goals in barely a minute at the start of the second period, the Dragons roared back with four unanswered markers to win it 5-2.

Familiar faces: Linus Videll, one of the stars of our debut season in KHL, joined Barys in the fall. He has 11 (5+6) points from 16 games in Nur-Sultan. Canadian defenseman Jesse Blacker played for Red Star in 2017/18, collecting 9 (1+8) points from 49 appearances.

Background: Our last game of 2019 takes us to Kazakhstan. Barys is just four points ahead of us at the time of writing, although it is a testament to how tight the Eastern Conference is at present that a mere six points separate the Kazakhs in fourth from Admiral outside of the playoff places. It is truly a season where any team can beat any other, and where every game makes a huge difference to the standings.

Barys enjoyed a good run of form on its last road trip, but then hit a bump. A 1-3 loss at Spartak at the end of that journey was following by a 2-6 reverse at home to SKA on Christmas Day. That heavy loss was out of character for Andrei Skabelka’s team, which has the second best defensive record in the Eastern Conference after Ak Bars. The Kazakhs then slipped to a third successive loss, going down in overtime at home to Dynamo Moscow on Friday.