Flying fists and a heavy defeat 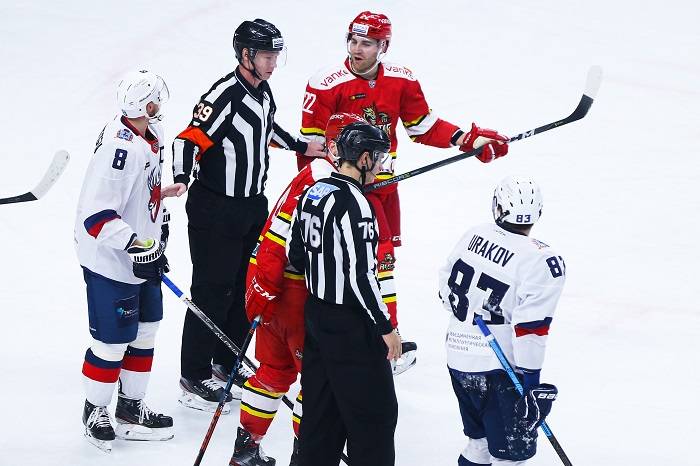 The Dragons came crashing back to Earth as the team’s winning streak ended in emphatic style. Not only did Torpedo’s 7-2 scoreline inflict our heaviest loss of the season, Saturday’s game also saw an unwelcome return of the frequent visits to the penalty box that had largely disappeared from our game in recent weeks. With Garet Hunt and Luke Lockhart both receiving game penalties, suspensions are likely to follow, further limiting our offensive options for Monday’s encounter with Avtomobilist.

On the plus side, the first period went well. Despite giving up an early goal from Jordan Schroeder, the Dragons wasted little time in tying the game on their first power play of the evening. Brandon Yip got the goal, firing home from between the hashmarks as Andrew Miller screened Anders Lindback in the Torpedo net.

Then came a first goal in our colors for Denis Osipov. The defenseman had two assists from his previous 19 games and added a goal midway through the first period here as Red Star took the lead. Tyler Wong extended his productive run with an assist, taking the puck around the back of the net before sending it out to Osipov for a one-timer that crashed home from the deep slot. Wong now has 7 (4+3) points in his last six games.

So far, so good. An even, entertaining first period ended with the Dragons in front. Unfortunately, the second period saw all that good work disappear in the space of two crazy minutes. In the first minute of the frame, Anton Shenfeld threaded a pass between Ryan Sproul and Andrew Miller to find the stick of Stanislav Bocharov for the equalizer. Ten seconds later, Daniil Ilyin fired home from the top of the circle to put the visitor in front. There was barely time to steady the team before a breakaway saw Paul Szczechura beat Jeremy Smith at the second attempt and open a two-goal lead. Midway through the frame, Denis Barantsev’s slap shot made it 5-2 and the game was getting away from Red Star fast.

Curt Fraser changed his goalies – not a common response from the bench – and Simon Hrubec took over from Smith. But the Czech international could not turn the game on his own and our options on offense have been limited by injuries in recent weeks. The offensive spark that might have dragged the Dragons back into the game was absent. Torpedo continued to rack up shots on goal: in the middle frame it put 18 efforts on target and saw a further nine blocked by our defense.

Hrubec kept the visitor at bay until the 51st minute when another power play for the visitor brought a second goal of the evening for Schroeder. There was still plenty of fight on display when Brandon DeFazio was caught by Georgy Misharin. Brandon Magee jumped in to avenge his team-mate, DeFazio picked himself up to join in the fight and further scuffles broke out as Werek clashed with Bocharov and Murphy squared up to Orlov. Ilyin and Sproul also got involved and by the end of the discussion the penalty boxes were overflowing. However, Torpedo had a man advantage – it was four against five on the ice and in the sin bins – and the power play saw Kirill Urakov added a seventh goal.

With five minutes left, Garet Hunt’s evening came to a premature end. Having sat out the earlier brawl, our enforcer got involved in a fight with Schroeder after finding himself on the end of a cheap shot as the players skated into the Red Star zone. And later still Luke Lockhart left the game after putting a huge hit on youngster Denis Pochivalov as our guys skated perilously close to losing their discipline.

Thus the winning run came to an end. Three successive victories, points collected from eight games in a row. But the end of one streak is the start of another. On Monday the team has a chance to return quickly to form when Red Star entertains Avtomobilist here in Beijing in a game between two rivals for a playoff place in this season’s Eastern Conference.