All we want for Christmas is … wins!

A three-game winning streak has lifted Red Star firmly into the playoff places in the East – and there’s plenty of confidence bubbling around Curt Fraser’s team right now. Our latest home stand began with back-to-back wins against Admiral to cement a top eight place and now we continue with three more battles in Beijing. Two upcoming opponents – Torpedo and Dinamo Minsk – arrive on the back of some indifferent recent form in the Western Conference, while Avtomobilist is a direct rival as we jockey for position in the East. It all adds up to a Christmas cracker as our Dragons look to giftwrap a winning run for the Kunlun fans. 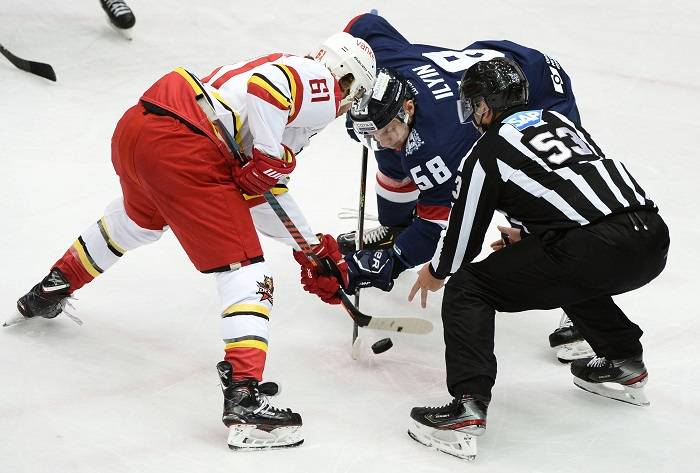 Last time out: The Red Star power play was on top of its game when we went to Nizhny Novgorod in October. Goals from Andrew Miller and Cory Kane punished Torpedo’s indiscretions as we secured a 2-1 victory and claimed a first ever win over this opponent.

Familiar faces: Following Wojtek Wolski’s departure from Beijing, there are no former Torpedo players on our roster.

Background: Recent form has not favored Torpedo. David Nemirovsky’s team made a bright start to the season and earned a reputation as a master of the comeback win. Fans in Nizhny Novgorod thrilled to high-scoring wins in games that went down to the wire. Lately, though, it’s not been such a happy picture. Torpedo lost its last five games, culminating in a 0-4 loss at home to Barys on Wednesday. That’s pushed the team down to eighth place in the West, although it still has a comfortable lead over ninth placed HC Sochi.

That game against the Kazakhs saw Damir Zhafyarov miss out. The forward, a key man for Torpedo this season, was involved with team Russia at the Channel 1 Cup but suffered a minor injury during the tournament. If he is unavailable this weekend it would rob our guest of its leading scorer; Zhafyarov has 30 points from 36 games this season. In recent games, Jordan Schroeder, Daniil Ilyin and Stanislav Bocharov have led the Torpedo scoring.

Last time out: When we went to Yekaterinburg in September we met an Avtomobilist team that made a blazing start to the season. A battling performance secured a 4-4 tie in regulation before the host snuck the verdict in overtime.

Familiar faces: Our forward Gilbert Brule began his KHL career in Yekaterinburg, playing 44 games in 2014/15 and scoring 15 (10+5) points. Much travelled D-man Denis Osipov also had a spell in the Urals, playing 52 games for Avto in 2011/12.

Background: At the start of the season, not many outsiders would expect the Dragons and the Motormen to be in direct competition for a playoff place. But this has been no ordinary season. The Eastern Conference is astonishingly congested, with just five points separating Avtomobilist in fourth place from Admiral in ninth. Red Star is handily placed in the middle of that pack and all of the teams battling for the top eight understand very well that a run of wins could make all the difference when it comes to securing that playoff place.

This game promises to be a battle of two in form teams. At the time of writing, both are defending three-game winning streaks. Avtomobilist looks to have shaken off the slump that saw it drop from top to bottom in the Eastern Conference after that bright start and forward Anatoly Golyshev recently celebrated a landmark when he became the club’s all-time leading scorer. However, the biggest threat to Red Star may come not from him, nor from the high profile likes of Pavel Datsyuk or Nigel Dawes. Artyom Gareyev holds the unlikely distinction of being the leading scorer in this particular feature, having found the Dragons’ net seven times in total. However, it’s worth noting that Gareyev has been at Avtomobilist throughout Kunlun’s time in the KHL; our very own Tyler Wong scored twice in his only meeting to date with the Motormen.

Last season: We met the Belarusians twice in the space of a month and both games finished 4-1. In Minsk, a goaltending masterclass from Jhonas Enroth sent the Dragons spinning to defeat, but we got our revenge on home ice thanks to goals from Palola, Kane, Vitasek and former Minsk forward Justin Fontaine.

Familiar faces: These two teams might be at opposite ends of the KHL map, but there’s been a steady flow of players between China and Belarus. Our defenseman Denis Osipov had a stint in Minsk, while Dinamo is currently home to Marc-Andre Gragnani and recently gave Mathew Maione a contract after he left the Dragons earlier this season.

Background: It’s been a tough season in Belarus. The team continues to enjoy huge support in a hockey-mad country, but restructuring behind the scenes has shaken up the roster available to head coach Craig Woodcroft. Traditionally, Dinamo is envisioned as a kind of base club for the Belarusian national team; when Belarus was relegated to the second tier of the World Championship in 2018, the country’s authorities reviewed their priorities and decided to give more opportunities for young Belarusian players to try their skills in the KHL.

It’s a situation familiar to Red Star fans: developing players for the national program while maintaining a competitive roster in one of the most demanding leagues in the world is a tough ask. And while results on the international stage are encouraging – Belarus won promotion back to the elite last season and has done well in this year’s Euro Challenge events – the day-to-day grind in the League has been a struggle. The Bisons are already off the playoff pace and the season seems to be shaping for a battle with Dinamo Riga to escape last place in the Western Conference.

Kunlun will need to be wary of the threat posed by Gragnani: in his first season with Dinamo he scored on us three times, the kind of form that encouraged the club to bring him to China last year. However, with his team on an eight-game losing streak, even the powerful Canadian blue-liner is finding life tough. His last goal came back on Oct. 3 in a 5-3 win against Traktor.