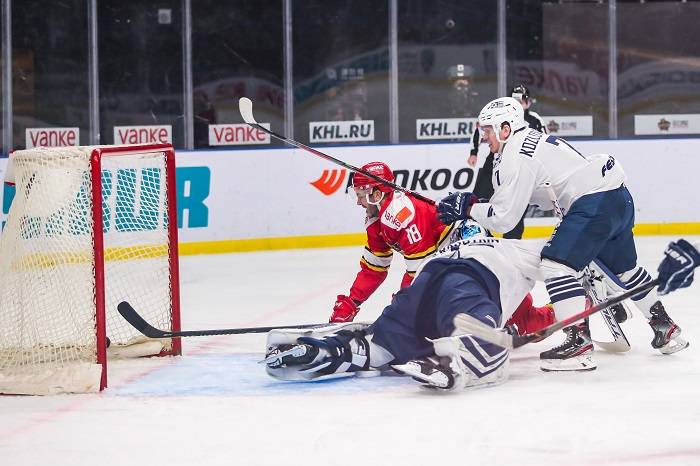 The Dragons made it back-to-back wins in Beijing and took their tally to 10 goals in two games with another impressive display against Admiral. Club captain Brandon Yip celebrated a landmark by potting the opening goal, Luke Lockhart scored twice and Trevor Murphy got a goal and an assist as the home offense fired in style to sink the Sailors.

Another victory also means we get to consolidate our position in the top eight, bringing that target of a place in the playoffs into clearer focus. And it extends some positive streaks: three successive wins, points taken from each of the last eight games and just one loss in seven. It’s an upswing in form that is arriving at the perfect time as the regular season moves towards the closing stages; in recent seasons, the turn of the year has often been a moment when Red Star has fallen away but this season it’s poised to be the time when the team really starts to shine its brightest.

For captain Yip, today was a big day. He made his 139th appearance for the Dragons, matching the club record set by Joonas Jarvinen. And, ensuring it was a day to remember, he potted the opening goal of the game to give Red Star the lead after 10 minutes. Jake Chelios sent in a thumping slap shot from the center point and Yip was on the spot to put away the rebound after Anton Krasotkin’s scrambled save.

Once the scoring started, it didn’t stop. The teams traded goals at regular intervals from that point on. Yury Petrov tied it up but Red Star regained the lead on its first power play of the evening. It was a goal similar in spirit to Yip’s opener, but this time it was Trevor Murphy’s shot that had Krasotkin in trouble and Ethan Werek who reacted smartly to steer home the rebound via a defenseman’s skate.

Early in the second period the teams traded power play goals. Shawn Lalonde brought Admiral level for a second time, but within a couple of minutes Murphy restored our lead when he found the space to get a shooting position between the hash marks and beat Krasotkin.

The next big incident came moments later when Alexander Osipov clattered Luke Lockhart into the boards. Not surprisingly, Red Star’s players took exception to this rough treatment and a melee followed. Garet Hunt was prominent among those looking for vengeance and he joined Chelios and Admiral’s Nikita Bobryashov in sitting out minor penalties. Osipov, meanwhile, was sent back to the locker room in disgrace.

Admiral’s problems continued: Krasotkin had a nightmare moment for Red Star’s fourth, giving up a big, uncontrolled rebound under little pressure then seeing Tyler Wong whip the puck away behind the net and shoot it home off the young goalie’s back. For the first time in the game, we held a two-goal lead and that would prove to be more than the visitor could handle. True, Denis Vikharev pulled one back before the second intermission but that was the last scoring contribution from his team.

The third period belonged to Lockhart. Stirred but clearly unshaken by Osipov’s foul play in the second period, our forward delivered his own punishment for the opposition. He made it 5-3 when he tucked away a feed from Spencer Foo behind the net; in keeping with the theme of Admiral holing itself below the waterline, the play started when Foo pounced on a sloppy pass from a visiting defenseman to steal the puck. Then, to finish it off, Lockhart potted our sixth of the evening and our second short-handed goal in two games when he raced onto a Devante Smith-Pelly feed and streaked up the ice to beat the luckless Krasotkin.