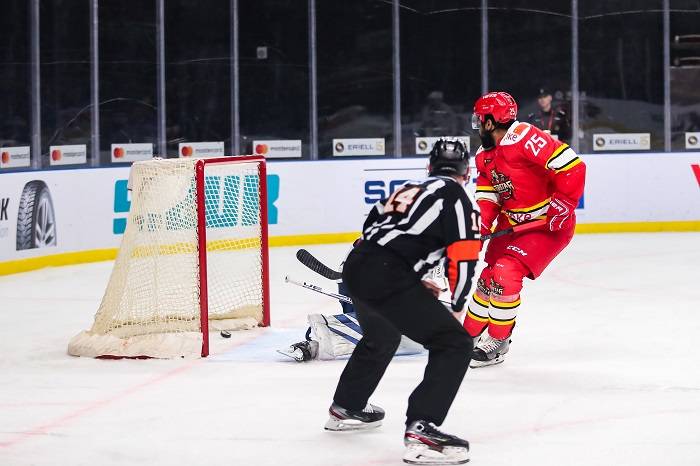 The Dragons stormed to their biggest win over the season, overpowering Admiral 4-0 and moving up into the top eight in the Eastern Conference. Red Star was on top in every aspect of Tuesday’s game, particularly as it jumped to a convincing lead in the first two periods.

There was also a big moment for Devante Smith-Pelly as he potted his first goal for the club since his move from the Washington Capitals at the end of October. The winger, a Stanley Cup winner alongside Alexander Ovechkin in 2018, made a slow start to his new life in China but got his first point in the KHL with an assist in our 3-2 win at Amur before the international break. And today he found the net for the first time in some style. Sent through one-on-one as the Admiral power play misfired, Smith-Pelly’s advance had Anton Krasotkin caught like a rabbit in the headlamps; a slick finish went through the five-hole and opened a 4-0 lead midway through the second period.

Kunlun was scoring goals in all flavors. The opener came in the ninth minute when Spencer Foo produced a moment of magic. Collecting a Tyler Wong pass on the left-hand boards, he burst through the challenge of two opponents, advanced to the net and waited for Krasotkin to commit himself before stretching to score on the backhand. Krasotkin, in the team in place of the injured Juho Olkinuora was left grasping at the air as Foo celebrated.

The first period was largely one-way traffic and when the Dragons converted their first power play of the game it was nothing more than the host deserved. Wong was involved once again, combining with Luke Lockhart to set up Olli Palola for a close-range finish. Palola, another player struggling for goals earlier in the season, now has three in two games – a welcome upswing in form for our Finnish finisher.

At the first intermission, the stats showed Red Star was up 20-5 on the shot count. Impressively, of 22 attempts on the net, 20 were on target. This was a fine display of attacking hockey and it got its rewards.

The middle frame continued in similar fashion. Andrew Miller added a third on the power play early the session before Smith-Pelly wrapped up the scoring. When the fourth goal went it, it began prompting questions about Red Star’s biggest ever KHL victory. The 5-0 victory over Medvescak Zagreb in December 2016 was under threat and, if there was any minor disappointment from the day, it might be that the Dragons did not press home their advantage and rack up a big score.

However, the games come thick and fast in the KHL and these two teams will meet again tomorrow with two more points at stake. So, with the result already secure, it made sense for Red Star to play with an eye towards the next meeting. The latter exchanges saw Admiral get a little more of the game, but the visitor never looked capable of solving Jeremy Smith and finding a way back into contention. A thoroughly professional third period saw Kunlun close out an impressive victory and build the perfect platform to chase back-to-back successes on Wednesday.