Palola at the double 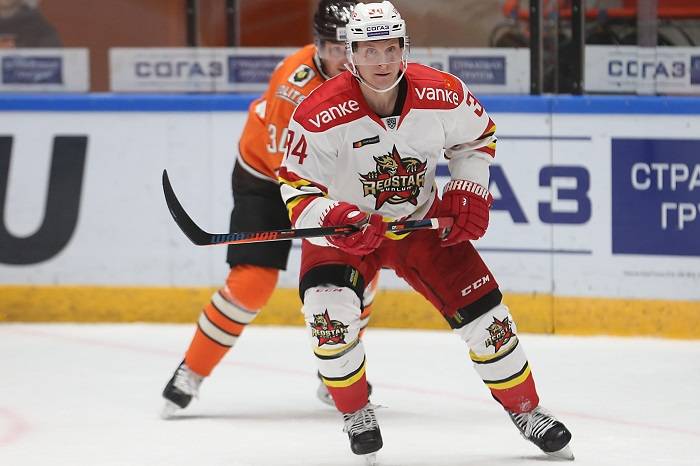 The Dragons made it to the second international break on a high note, with a 3-2 victory at Amur making it four wins in the past five games. It’s also now six outings in a row where the team has picked up at least a point; defeats against Avangard and Admiral both followed ties in regulation.

That run has not come without a cost, though. The loss of David Bondra with a broken arm in Vladivostok put even more pressure on our forward line. As expected, the club’s management responded by bringing in some new faces. Three players, Gunars Skvorcovs, Brandon Magee and Hu Yang, got a call-up from our VHL farm club; two of them went straight into Monday’s line-up.

For both Skvorcovs and Magee, it was a debut for Red Star in the KHL. However, the two players have followed very different paths to get here. Latvian international forward Skvorcovs has plenty of experience in this league after six seasons at Dinamo Riga. Magee, 25, is playing his first season outside of his native North America. He came to us in the summer from the University of Alberta and, as a Chinese heritage player, is looking to get a shot at the Olympic roster in two years’ time. His promotion to the big league is a reward for a prolific campaign in the VHL: in 31 games with KRS-BSU, Magee has 26 (14+12) points.

The Dragons don’t have a great record in Khabarovsk, with Amur winning the last five meetings here. Initially, it looked like another struggle was on the way. Jake Chelios got a double minor for high sticks and at the end of that power play Igor Rudenkov gave the home team the lead. However, it wasn’t long before the scores were level. Olli Palola stuffed home a rebound from Ethan Werek’s shot and an evenly matched first period ended with the scoreboard showing 1-1.

The middle frame followed a similar pattern. There was little to choose between the teams, but Red Star got in front thanks to Ryan Sproul in the 26th minute. That goal was notable for Skvorcovs and Devante Smith-Pelly, both of whom got their first points for the club with assists on the play. Again, though, the lead did not survive until the intermission; Hynek Zohorna tied it up.

But Palola was not to be denied. The Finn came into the game with just two goals – both game-winners though – to his name this season; he left it with two more on the night. Once again, Opa decided the outcome with a sniper’s finish from close range midway through the third period to make it 3-2. This time, the lead remained intact despite Amur’s late surge. Simon Hrubec stood firm in our net and, once again, our guys blocked more than 20 shots over the course of the game in another solid defensive performance.