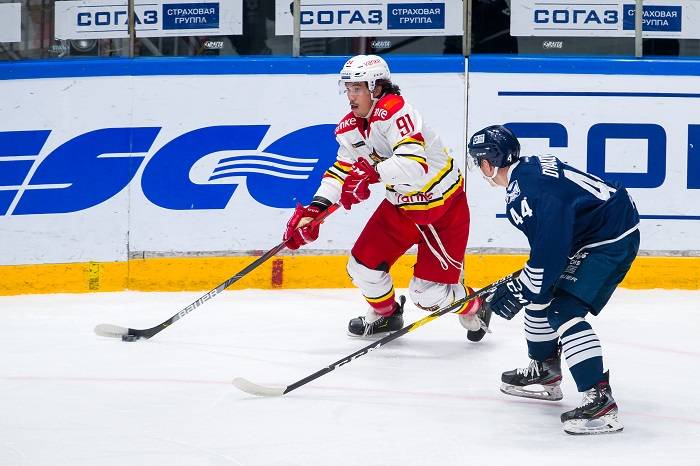 For the fifth game in a row, the Dragons added to their hoard of points. This time, two late strikes erased Admiral’s 4-2 lead and took Saturday’s meeting to a shoot-out before the Sailors edged a tight verdict. Two more goals for Tyler Wong took him to 10 for the season and makes him our leading goalscorer.

However, the game ended in a loss and the bad news was compounded when David Bondra suffered a broken arm during the first period. There’s a danger that the injury will rule our Slovak international out of the rest of the season, posing a new selection poser for our coaching staff. With top scorer Adam Cracknell currently facing a long-term injury, it’s possible the management will look to bring in reinforcements over the upcoming international break.

Bondra’s misfortune also disrupted Red Star’s progress in Saturday’s game. After coming out hard in the first period, looking to press an opponent that had played less than 24 hours earlier against Vityaz, Kunlun lost its way later in the frame. The bright start counted for little as our guys went into the intermission trailing by a single goal. Griffin Reinhart was caught in possession on his own blue line and Kirill Voronin streaked past to score on Jeremy Smith a minute before the hooter.

In the second period the Dragons twice tied the game, but Admiral responded immediately on both occasions. First, Gilbert Brule won an attacking face off and drove the puck to the net. Olkinuora made a block but the puck bounced out for Yip to swat it home on the backhand and collect his fifth career goal against Admiral.

Joy turned to frustration within the space of just a minute. Admiral went to the other end and Yury Petrov put the puck in the net from a tight angle, aided by a deflection. However, Jeremy Smith was convinced that he had been impeded by Enver Lisin after Petrov’s initial shot; the video review dismissed the Dragons’ protests.

There was almost a second tying goal following a breakdown in the home defense. Miller stole the puck and for a moment there were three Red Star forwards bearing down on Olkinuora. However, the Finn stood up to the danger and stopped Yip’s shot to keep his team in front.

Inevitably, the pressure told on Admiral and, with 3:45 remaining in the middle frame, the Dragons drew level. Ethan Werek was the architect, bringing the puck into the zone and pulling the defense out of position before setting up Tyler Wong for his ninth of the season. But even that was not enough to take us to the interval with the scores level; our former forward Martin Bakos made it 3-2 almost immediately after a slick passing combination left our defense in a spin.

Bakos was involved again early in the third as Markus Ljungh made it 4-2 and as the clock ran down it started to feel as if a two-goal cushion would be enough for the home team. But, in a game where goals came in sudden flurries, Red Star earned a reprieve in dramatic fashion. First, Wong smashed home his second of the night with a blistering shot from the left-hand circle. With three minutes to play, there was still a chance.

Then came Werek’s tying goal. Brandon DeFazio screened Olkinuora as Trevor Murphy’s point shot came in. The goalie reacted late and gave up a big rebound which went straight to Werek who fired into the roof of the net to make it 4-4. Red Star had to kill a penalty in overtime, with Jake Chelios making a huge sprawling save on the crease to rescue Smith, but this time the shoot-out proved a step too far.