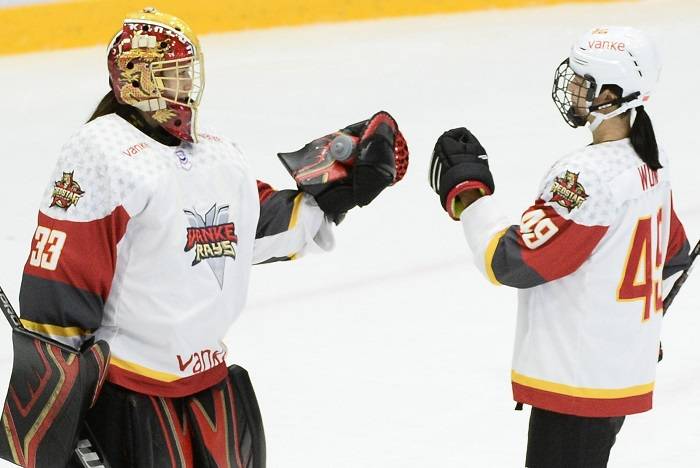 There’s more recognition for the stars of the KRS Vanke Rays, our team in the Russian Women’s Hockey League. A week after it was confirmed that head coach Brian Idalski would be on the staff for Team East at this season’s All-Star Game in Moscow, the KHL announced that six players on the team will be going to the big show.

More impressive, two of the group are Chinese-born players. On defense, Hueteng Qi and Zhixin Liu earned their call-ups after a rock solid campaign on the Rays’ blue line. Qi is the elder stateswoman of the two; aged 33, she’s back on the ice after a spending much of the past two seasons coaching. Since making her debut for Team China in 2004, she’s been part of the 2010 Olympic roster in Vancouver and also spent two seasons playing with a Chinese development roster in Finland’s national championship. This season she agreed to resume her playing career and has been an inspiration as captain of the Vanke Rays.

Liu, 26, has been a part of the KRS organization since we added a women’s team in 2017/18. A regular on our CWHL team for the two previous campaigns, she’s made a big contribution in the Russian League this season with 10 (4+6) points from 20 games. Like Qi, she was part of that Vancouver Olympic roster and has represented her country in every season since then.

Meanwhile, two of the forwards selected for the All-Star Game are potential Chinese Olympians in 2022. Leah Lum, 23, is listed by the WHL as a Chinese-Canadian player. The University of Connecticut graduate is in her second season with the Rays and has 18 (9+9) points from 20 games so far. Similarly, Rachel Llanes, American born with Filipino heritage, is listed as a Chinese player by the WHL. The 28-year-old, who won both the NWHL and CWHL championships while playing in Boston, is in her third season with KRS. So far, she has 32 (16+16) points in the WHL. Like many of the players on the Dragons’ KHL team, these two will be hoping to secure Chinese citizenship and get a call for Beijing 2022.

A third Rays forward, Alex Carpenter, already has an Olympic medal. In 2014 she was part of the USA team that lost out so narrowly to Canada in the gold medal game in Sochi. The 25-year-old has been a stand-out player in her three seasons with the team and she’s leading the scoring in this season’s WHL with 45 (18+27) points. Carpenter will be an alternate captain in Moscow.

Goalie Kimberley Newell completes the KRS group. The 24-year-old Canadian has represented her country at U18 level, winning World Championship gold while playing college hockey for Princeton. After graduating, she took a short break from the came but returned to join us in last season’s CWHL campaign. This term, she’s played 12 games and posted a GAA of 1.74 while stopping 94% of the shots she faced.

The WHL All-Star Game takes place on Jan. 12 at the VTB Arena, home of Dynamo Moscow. The event is part of the FONBET KHL All-Star Week 2020 and two players from the women’s event will be invited to join the KHL Skill Show on the following Saturday.

News about the Team Chernyshev roster for the KHL All-Star Game will be announced later this month. In previous seasons, Chad Rau, Magnus Hellberg and Marc-Andre Gragnani were chosen to represent the Dragons, although Gragnani missed out on his scheduled 2019 appearance due to injury.