Into the top eight 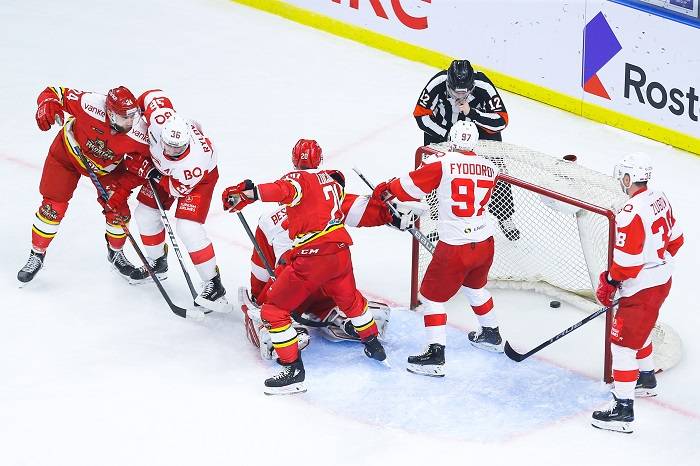 The Dragons moved into the top eight in the Eastern Conference thanks to another overtime victory. Wednesday’s success over Spartak takes our team past Metallurg and Neftekhimik in the race for a play-off spot and stretches our winning streak to three games. This latest home stand concludes with a hugely satisfying return of seven points from a possible eight; only a shoot-out loss to Avangard spoiled the record in our four games in Beijing.

However, amid all the good news, there were some worrying moments. For two periods of this game, Red Star played excellent hockey. In the other one, not so much. Definitely a case of two thirds good, one third bad prior to the extras.

The first period was one of the good bits. Although Spartak had plenty of time in the Red Star zone, the visitor struggled to get meaningful looks at Jeremy Smith’s net. Instead, well-drilled defense kept the Red-and-Whites to the outside. At the other end, the Dragons’ raids were direct and on point: with five minutes played, Ryan Sproul’s defense splitting pass from blue line to blue line released Cory Kane for the opening goal. It was a deceptively simple play to net Kane’s first goal since October 31. Goal number two was another sucker punch. Spartak’s power play failed, Yakov Rylov’s pass was intercepted in center ice by Brandon DeFazio and he raced through to shoot at Nikita Bespalov. The goalie seemed have it covered, but as our forward closed in search of a rebound the Spartak man allowed the puck to squirm from his grasp and into the net.

But then came the problems. Red Star began the second period on the PK and Spartak took advantage to reduce the arrears through Ilya Zubov. The visitor held a territorial advantage throughout the second frame but it wasn’t until a late penalty on Kane that the Muscovites tied the scores. This time Zubov turned provider as Artyom Fyodorov found the net. Within a minute, there was even worse news as Maxim Goncharov made it 3-2 to Spartak. From a winning position at the first intermission, Kunlun went into the second break on the wrong side of the scoreline.

After that second-period collapse, the Dragons had it all to do. And our guys roared back into the game at the start of the third when Gilbert Brule slalomed his way down the left channel before picking out the wide open Tyler Wong for the tying goal. That set the tone for a third period where Kunlun had the better of the game but could not find a way past Bespalov for a winning goal in regulation.

Overtime provided what was lacking: Red Star pressed from the start and earned a power play when Anatoly Nikontsev was called for hooking. That man advantage turned into a winning goal when Brule collected the puck behind the net and picked out Trevor Murphy in the circle for a wrister that beat Bespalov on the blocker side.

Thus, the winning run continued as a profitable sequence of home games comes to an end. The next action brings a short tour of the Russian Far East for games at Admiral (Dec. 7) and Amur (Dec. 9) in the build up to the next international break. The Dragons return to the ice in Beijing on Dec. 17 with the first of two back-to-back home games against Admiral.