Getting a little extra 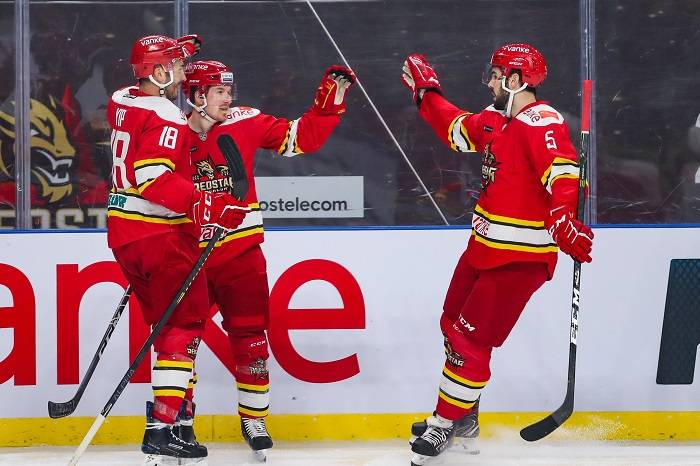 For the second game in a row, Red Star found a way to win outside of the 60 minutes. Our third shoot-out win of the season arrived courtesy of successful conversions from Andrew Miller and Luke Lockhart, plus four saves from Simon Hrubec. And it highlighted one of the other major advances on last season.

So far in 2019/20, the Dragons have gone to overtime on nine occasions. Five of those have brought victory, twice in the extras and three times in a shoot-out. That’s a huge step up from the previous year, when 12 trips to overtime resulted in 11 losses and just a solitary win. How much impact does that have on the league standings? Well, if last season had brought a 50-50 win ratio in overtime, the extra five points would have lifted the Dragons two places in the tournament standings and cut the gap to the playoffs to just two points, regardless of any points taken away from our rivals. In a nutshell, turning ties into wins makes a difference – and potentially enough of a difference to transform a near-miss into a playoff place.

From game one this season, a 4-3 shoot-out success over Salavat Yulaev, finding a way to secure the ‘W’ in 60, 65 or more minutes, has been a big part of the Dragons’ increased competitiveness. Today it was clear during overtime that Red Star was the team most likely to force a result before the shoot-out. When Pekka Jormakka took a minor penalty for Vityaz 90 seconds into the extras it tipped the balance of the game in our favor and ensured that Kunlun would dominate the closing stages. Only the excellence of visiting goalie Igor Saprykin denied us a win in overtime but when it came to the shoot-out nothing was going to stop our team.

For two rounds, the goalies were on top. Hrubec denied second-period goalscorer Denis Orlovich-Grudkov and Pavel Chernov before he was beaten by Joonas Nattinen. Miller responded immediately for Red Star, Hrubec outwitted Jormakka and along came Lockhart to tuck away the winner. Hrubec applied the finishing touch when he denied Alexander Semin and, once again, Red Star drew level with Metallurg and Neftekhimik, the two other teams currently vying for eighth place.

It was hardly a surprise that today’s game went all the way to a shoot-out. From the opening exchanges there was little to choose between the two teams. In the first period, 18 shots were evenly divided between them without producing a goal. In the second, Red Star got in front thanks to Miller, a man who clearly enjoys his meetings with the team from Podolsk. A few weeks ago he hit a hat-trick in a 4-2 win on the road at Vityaz and today he got the decisive touch to open the scoring. Ryan Sproul’s point shot might have been straightforward for Saprykin, but Miller was on the slot to distract the goalie and deflect the puck into the net.

Although that goal heralded a second period in which the Dragons enjoyed some of their greatest control of the game, this was the kind of battle where neither team was going to romp away with the game. And Vityaz made sure of that in the 34th minute when Orlovich-Grudkov tied it up with a goal on his debut following a recent move from HC Sochi. The 24-year-old, whose nascent KHL career started with Amur, did well to circle around our zone and hold off the attentions of Jake Chelios before shooting home. But a hard-working Red Star performance ensured that there was nothing more for the visitor to celebrate as we made it two successive wins and three in a row where we have taken at least a point.