Halted in a shoot-out 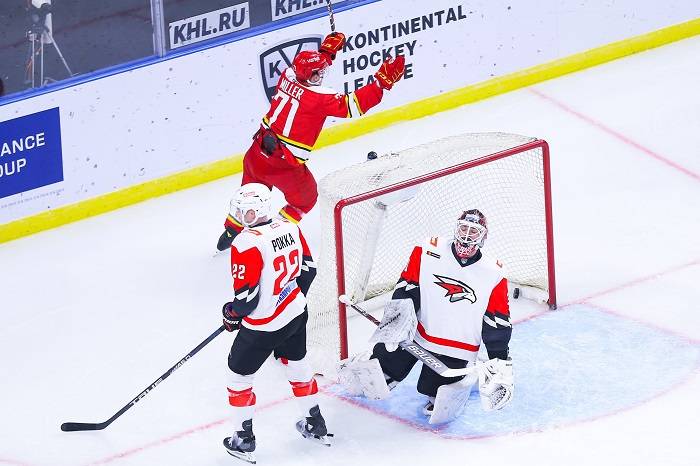 A battling Red Star performance came up just short as Avangard smuggled away a shoot-out win in Beijing. Despite two well-taken goals from Adam Cracknell and Andrew Miller, plus a strong goaltending display from Simon Hrubec, the Dragons had to console themselves with a single point from the first game of our double header against the Hawks.

There was good news for the team even before the puck was dropped. Captain Brandon Yip, out of action for just over a month due to injury, was back in the line-up. He joined Miller and Wojtek Wolski on the first line and went on to celebrate his return with a helper on Miller’s second-period goal. But there was plenty of action before that play.

Red Star made a bright start to the game and there were some decent chances for Ethan Werek, Vic Bartley and Yip to open the scoring before Cracknell gave us a deserved lead in the 13th minute. Oddly, that goal came as the Dragons killed the first penalty of the game: Wolski sat for tripping but Ryan Sproul intercepted the puck in center ice and released Cracknell into the Avangard zone. His wrister whipped past Igor Bobkov for his seventh goal of the season.

Goalie Hrubec had his eye on a landmark: after a shut-out in his previous appearance, the Czech was closing on 100 minutes without allowing a goal. Sadly, his record fell just eight seconds before that moment when Yegor Martynov’s point shot was deflected into the net to tie the scores. And worse was to follow in the last minute of the frame when Semyon Koshelev gave the visitor a lead that somewhat flattered its performance up to that point.

However, there is resilience in this team. Early in the second period, the Dragons found an equalizer courtesy of a brilliant finish from Miller. Yip provided the assist, sending the American forward down the left-hand channel. Miller cut inside, got to the face-off spot and wired an unstoppable effort over Bobkov’s shoulder.

That proved to be the end of the scoring, something of a surprise given the up-tempo hockey we saw early in the evening. For the first time in 11 meetings, it would take overtime to separate these two teams. Hrubec finished the game with 33 saves in another noteworthy performance; his late save to deny Ville Pokka was perhaps the most significant of them all. Red Star also survived a 3-on-5 situation early in the third period with the Avangard offense unable to generate more than half chances.

The lack of scoring continued into the shoot-out, with both goalies on top. Only Koshelev managed to find the net and when Ryan Sproul failed with Kunlun’s final attempt the points went to Avangard.

But that’s not the end of the story. The teams meet again here on Saturday with a revenge mission already in preparation. Today, we ran the Chernyshev Division leader close. Can we go one better at the weekend?