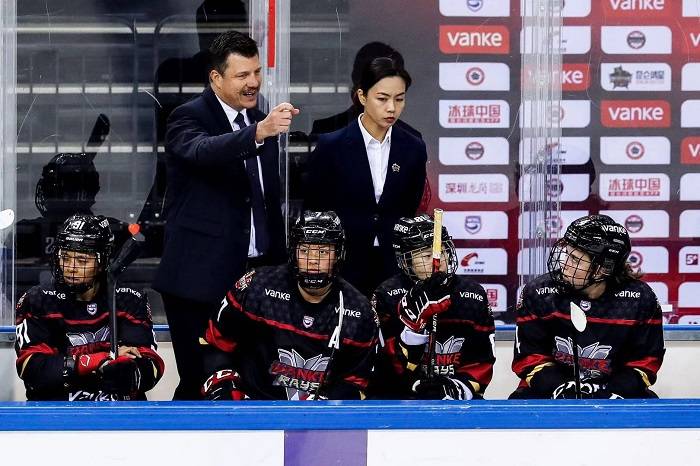 There’s more to the Dragons than the KHL team. As everyone knows, the club was established to fast-track the development of Chinese hockey ahead of the 2022 Winter Olympics here in Beijing – and that means a full development program for the game.

And it’s not just the men’s game. China will also be sending a women’s team to compete at the Games. As a result, the KRS Vanke Rays is continuing to provide top level action for our most talented girls and is becoming a valuable part of Russia’s Women’s Hockey League.

Joining the league in the summer was a big vote of confidence in the Rays. Previously, no foreign team had competed in the Russian championship but there was a belief that crossing the border into China would add a worthy opponent to the mix. So far, that’s proved correct. The Rays have set league attendance records at their home arena in Shenzhen (remember how Red Star did the same in that sweltering Southern city early in the season?) and the team is currently up to second place in the championship table behind defending champ Agidel Ufa.

That success hasn’t gone unnoticed. The WHL is preparing for its All-Star Game, which takes place in Moscow in January as part of the KHL’s All-Star Week. And KRS head coach Brian Idalski has been nominated to lead Team East alongside his colleague and rival from Ufa, Denis Afinogenov. For a coach and a team that has been in the competition a matter of months, that’s a major accolade.

“It’s a great honor for me to coach at this festival of hockey, especially considering that this is the first season for me and my time in the WHL,” said Idalski. “Taking part in this game is a chance to get know other players and other styles of play. And I’m sure it will be a great chance for me to practice my Russian!”

The 48-year-old American has seen his team adapt quickly to its new competition after previously playing two seasons in Canada’s now defunct CWHL. And there are promising signs for the national program as well. Players like Rachel Llanes and Leah Lum are among the league’s leading scorers and both have Chinese heritage that could enable them to join the national team. There’s also a big boost with the return of vastly experienced defenseman Xueting Qi. The 33-year-old was part of the Chinese team that qualified for the Vancouver Olympics back in 2010 and she’s now playing regular hockey again for the first time since 2015. As team captain, the Harbin native has produced a solid return of 9 (1+8) points from 18 games proving that she still has what it takes to make an impact at the highest level.

The 2020 All-Star Game will be the fourth edition of this event. Team West currently has a 2-1 lead in the series, but Idalski and his players will be determined to tie it up in the next encounter on Jan. 12 in Moscow.