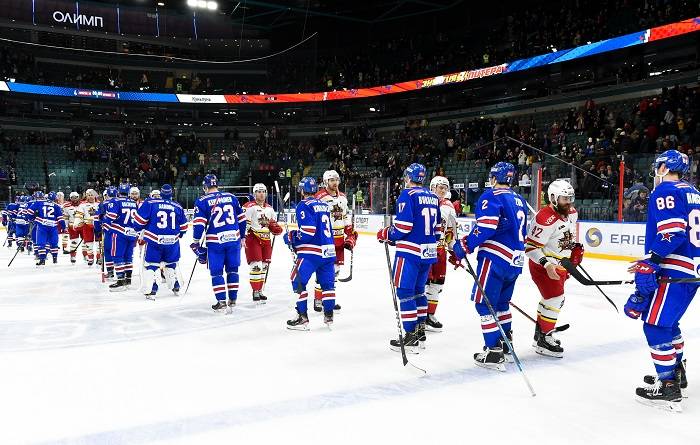 Red Star could hardly have asked for a better start. The Dragons’ first attack of the game saw Spencer Foo put the team in front in the second minute. The whole play took 10 seconds from winning a face-off to getting the puck in the net, with Foo surging down the left and swinging the puck towards the crease where Magnus Hellberg got his skates in a tangle and deflected it into his own net.

However, it took barely 90 seconds for SKA to tie the game – albeit in controversial fashion. Artyom Zub fired home from between the hash marks but the issue lay with events on the crease. Evgeny Ketov tangled with Vic Bartley in front of the net and, in process, took out Jeremy Smith. The video review found no fault with the play; Vic’s body language suggested he may have a different opinion of events.

Subsequently, Kunlun demonstrated once again the kind of resilient defensive performance that has stood the team in good stead this season. Although SKA had a significant territorial advantage – and fired in 24 attempts – only eight shots got through to trouble Smith. A similar number were blocked by our guys and the rest went high and wide as the home team struggled to get a clear look at the target in the face of our hard work.

However, that impressive defensive effort, limiting SKA’s powerful offense to a handful of opportunities, is draining for any team. In the second period, sadly, Red Star could not maintain the same intensity. There was an early warning when the puck bounced off Bartley’s skate and slithered towards the net with Smith stranded, but Jason Fram was quick to react and clear the danger. There was a further reprieve soon after when Jarno Koskiranta put the puck in the net but saw the goal whistled off for kicking the puck.

But there was no escape moments later when two goals in 30 seconds took the game away from our guys. First, a great pass from Koskiranta presented Anton Burdasov with a simple close-range finish, then young Kirill Marchenko added to his first period assist. The 19-year-old now has three goals and two assists in his first 10 games for the club, plus a shoot-out winner.

SKA continued to press, with Jori Lehtera hitting the post late in the middle frame. Kunlun chances were few and far between, although Ryan Sproul tested Hellberg with a long-range effort not long before the hooter. And that pattern continued in the third: the Dragons killed an early penalty but SKA kept coming. Smith did well to snuff out the danger after Burdasov looked to set up a play from behind the net and made a smart save to deny Ketov. However, he was left exposed midway through the period when a Red Star attack broke down and Dmitry Kagarlitsky and Joonas Kemppainen orchestrated an odd-man rush. The latter put the puck into the net to complete the scoring and maintain an unwanted record for Kunlun. After eight meetings with SKA, we’re still awaiting our first victory over the team from Petersburg.

Monday’s game concludes our latest road trip. The next action comes on Thursday back in Beijing, where Bob Hartley’s Avangard will be the visitor. A repeat of last month’s 3-0 win on the road in Balashikha would be most welcome.