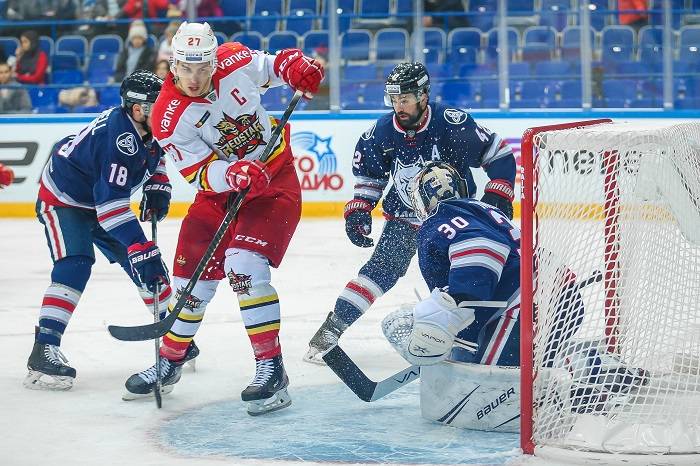 Soccer fans love a chant of ‘Can we play you every week?’. Dragons supporters could be forgiven for adopting similar sentiments where Neftekhimik is concerned. For the fourth time this season, the Dragons proved too hot for Vyacheslav Butsayev’s men. A shut-out from Simon Hrubec backstopped a solid performance and goals in the third period from Olli Palola and Adam Cracknell sealed a victory against one of our big rivals for a playoff spot this season. Right now, Neftekhimik looks like our favorite opponent.

For Palola, the goal was an important moment. Our Finnish forward hadn’t found the net since September 30. Hopefully tonight’s goal can trigger a return to the predatory form that made him our second-highest goalscorer last season. But the key to this success was teamwork, from the resolute defense marshalled by the impressive Hrubec to the reliable game management that took that third period lead and calmly protected it until the end.

It was an even first period, according to the stats, but that wasn’t good enough for our guys. During the intermission, captain Cracknell was quite clear that Red Star needed to raise its game. Too many turnovers, too many opportunities for Neftekhimik to get an odd-man rush; it all had to change.

It took time for those changes to have an impact. The second period, like the first, was very even and again produced no goals. But early in the third, Red Star’s persistence paid off as Olli Palola gave the Dragons the lead. This time, it was Kunlun with the odd man rush as Ethan Werek sent Garet Hunt away down the left channel. Hunt slung the puck to the slot where Werek and Damir Sharipzyanov tangled with goalie Konstantin Barulin to present Palola with a tap-in at the back door. Not only was it a big moment for Palola, it also meant a lot to Hunt as his assist secured a first KHL point. All the talk about the 32-year-old has focussed on his role as an enforcer; many have overlooked that there is more to his game than raw aggression.

Once in front, the game management took over. The third period, for the first time in the game, showed a clear advantage for Red Star in terms of time spent on offense. This was no reckless charge up the ice, though. It was more a question of steadily putting the squeeze on Neftekhimik’s forward options while our forwards continued to play in a similar vein. And it paid off handsomely, not only seeing out the victory but adding a second goal as well. Cracknell scored it, his sixth of the season, firing an Andrew Miller pass in off Barulin’s glove. A tale of two goalies, perhaps? While Hrubec gave the Dragons a way to win with another excellent performance, his opposite number was left disappointed by both the goals he allowed.

In the bigger picture, it’s hard to overstate the importance of this result. First, it moves us within two points of the playoff places. Avtomobilist, Metallurg, and today’s opponent, Neftekhimik, are all now within striking distance in the top eight. It also completes a sweep of four wins against today’s opponent. That’s significant not just because of the confidence boost that winning always brings. Neftekhimik is one of the teams that is generally in and around the battle to make the playoffs, and thus one of our direct rivals. Establishing this kind of stranglehold over one of our immediate peers suggests that this season’s roster is capable of getting over the line and making post season for the first time since our rookie season.

Then there’s the little matter of the quality of opposition. Don’t forget that this Neftekhimik team recently ran up a 10-game winning streak including victories against top-quality opponents such as Ak Bars, CSKA and SKA. Butsayev’s roster has plenty of talent – and once again, Red Star found a way to prevail.