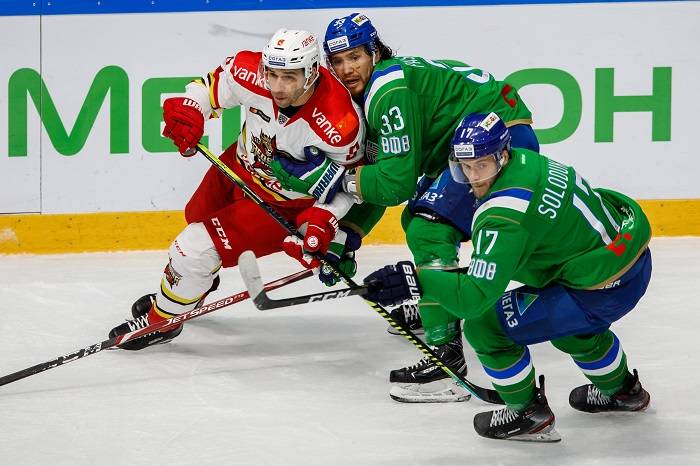 At the highest level of any sport, a single error, a solitary fluffed play, can be the difference between triumph and despair. And few games taught that lesson as clearly as the Dragons’ trip to Ufa on Wednesday.

The bare stats show a 1-0 scoreline with home goalie Juha Metsola standing on his head to make 37 saves. But that only tells part of the tale. For long spells in the game, Red Star was dominant here. The visitor had 84 attempts in total, spending more than 15 minutes in attacking positions. The home net was protected by the piping, spared by blocked shots and maintained by Metsola’s excellence.

The evening had another notable feature. In 60 minutes of hockey, neither team took a penalty. Combative forward Garet Hunt, back in the team with a view to disrupting some of Ufa’s offensive prowess, gave a typically full-blooded performance and his running battle with Pavel Koledov was one of the game’s intriguing sub-plots. But his comments during the second intermission highlighted how a Red Star team that was once collecting penalties as quickly as it clocks air miles has developed a new streak of discipline. “It’s a fine line,” Hunt said. “I don’t wanna be over the edge and hurt our team by taking a penalty but I have to be on the edge to play my game and keep my place in the team.”

But the only goal came at the other end. As the home team looked to take the early initiative, Jason Fram was caught in possession close to his own net and Nikita Soshnikov opened the scoring when he redirected a Maxim Mayorov shot past Jeremy Smith. Barely four minutes had been played and an unfortunate misjudgement had been heavily punished, but if the home team expected to roll to a straightforward win, it was much mistaken.

Red Star was quick to take the fight right back to Salavat Yulaev, and came agonizingly close to a tying goal midway through the session. Ryan Sproul swung in a puck from the boards and found Brandon DeFazio on the slot. His shot cannoned back off the post and, from the rebound, Andrew Miller’s venomous return of fire clipped the inside of Philip Larsen’s leg and somehow squeezed just past the post.

The near misses kept coming. In the second period, too, the Dragons looked the more effective team. This might have been the only frame in which Salavat Yulaev had more shots, but more than twice as much play was in the home zone and the best chance of the session went our way. Cory Kane’s pass towards Devante Smith-Pelly at the back door offered our recent season a great chance to get his first KHL goal; unluckily, the puck got caught between the Stanley Cup-winner’s skates and bounced to safety.

If Red Star had reasons to feel it did not get its just rewards in the first two periods, the third saw the Dragons do everything but score a goal. The visitor’s domination was complete: 32 attempts to 5, 18 shots to 1. By the end of the frame, Ufa had blocked 20 shots as it hung on grimly to secure the win.

For Kunlun, the fusillade came from all quarters, with every line taking the game to the opposition and pushing Salavat Yulaev further back with each passing shift. But the home team held on. Metsola pulled off a huge double save with five minutes to play: Wojtek Wolski picked out Andrew Miller, who found the Finn’s pads, then the puck fell for Ryan Sproul to see his goalbound attempt blocked as the goalie slid into place to close the door.

Later in the game, that willingness to block shots paid off. Red Star had already called goalie Jeremy Smith to the bench and was playing 6-on-5 in a last bid to salvage the game. Adam Cracknell’s shot knocked Vladimir Zharkov to the ice but the Ufa forward’s commitment was, in its way, as significant as Metsola’s big saves. The final chance had come and gone, and Kunlun left the ice frustrated by the result but with much to be proud of.