Taking momentum on the road

Another spell on the road has nothing to daunt our Dragons. Curt Fraser’s team heads off to Ufa, Nizhnekamsk and St. Petersburg buoyed by a valiant point at home to SKA and a historic victory over Metallurg. The momentum gained on that club record winning streak in late October is still with us and the team’s work ethic – visible from day one of the campaign – is starting to generate the results it deserves.

The upcoming tour features more tough tests. Both Salavat Yulaev and SKA have deserved reputations as big hitters in Russian hockey, while Neftekhimik has repeatedly shown that it can spring an unpleasant surprise for anyone inclined to take it lightly. Increasingly, though, Red Star has shown that it, too, can pack a bigger punch than many expected and there’s every reason to anticipate some joy from our latest excursion. 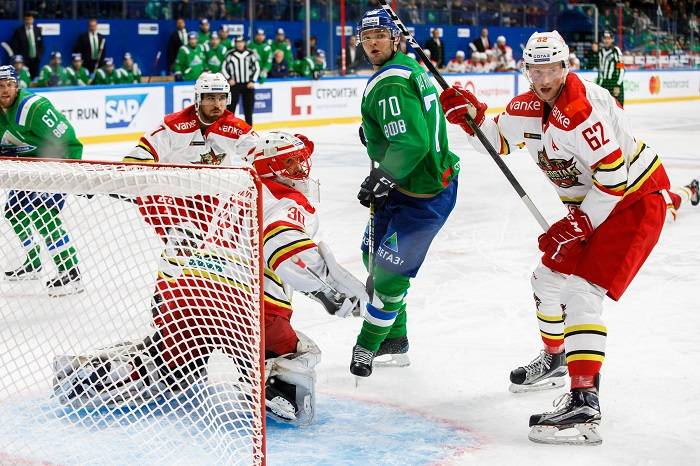 Last time out: Our previous visit to Ufa came on Sep. 19 and Red Star was unfortunate to leave on the wrong end of a 2-3 scoreline. The Dragons led twice in the game thanks to goals from Tyler Wong and Adam Cracknell but were beaten by a late power play goal from Philip Larsen. The teams met right at the start of the campaign in Shenzhen, collecting one win apiece.

Background: At its best, Salavat Yulaev can be frighteningly good. The recent 9-1 victory at home to Dinamo Minsk showed just what Nikolai Tsulygin’s team can do when it turns on the style, while a 5-2 win on the road at CSKA proved that this is more than just a flat track bully. However, consistency remains an issue, much as it did last season when Ufa underwhelmed in the regular season before raising its game in the playoffs. Between those big wins, Salavat struggled to get past lowly Dinamo Riga in overtime. Its last two games have also ended in heavy losses, 1-5 at Lokomotiv and 1-4 at Avangard.

Coaches facing Ufa generally conclude that the key to success lies in stopping Linus Omark and Teemu Hartikainen. The imports are closing in on Alexander Radulov’s KHL scoring records for the club and have certainly taken their toll on Red Star in the past. Omark has 13 (2+11) points against us, while Hartikainen has 9 (7+2). For Kunlun, Adam Cracknell has found this opponent to his liking, collecting 4 (2+2) points in three games so far in his KHL career.

Last time out: As Red Star returned to Beijing, back-to-back games with Neftekhimik really brought top-level hockey to the Chinese capital in style. The Dragons won twice at the start of the October, both by a 2-1 margin, with prominent contributions from both Brandon Yip and Andrew Miller.

Background: After those back-to-back losses against Red Star in October, Neftekhimik regrouped and went on a club record 10-game winning streak. However, that success has emphatically come to an end with three straight losses and 16 goals allowed in games against Lokomotiv, Spartak and Dynamo Moscow. Vyacheslav Butsayev’s team already looks somewhat streaky: a mid-table placing means little when assessing a team that swoops up and down the form charts on a regular basis.

However, history is very much in Red Star’s favor here. Of nine meetings in total, the Dragons have won six, including all three so far this season. Again, though, the devil is in the detail: all three of those were one-goal games, two of them were tied at 60 minutes.

Meanwhile, if Adam Cracknell enjoys facing Salavat Yulaev, it’s fair to say that Andrew Miller likes a bit of Neftekhimik. He has 5 (2+3) points from his three meetings with the team from Tatarstan, meaning he has been involved in five of our seven goals against this opponent this season.

Last time out: The teams met recently in Beijing and the Dragons achieved a first against the Army Men. Despite losing out in overtime, the point snaffled in a 2-3 loss was the first time Red Star took a point in any meeting with SKA.

Familiar faces: Swedish goalie Magnus Hellberg made his KHL debut with Red Star in 2017/18, doing well enough to secure a place on his national team and earn a move to SKA.

Background: In the past, playing SKA has felt like Mission: Impossible for the Dragons. Not only did the first six meetings between the teams end in defeat, there were few signs that Red Star was even competitive against one of the most powerful teams in the KHL. But the whole objective of our club is to ascend the hockey learning curve, and that overtime loss last week showed some of the progress we’ve made this season. It was followed by another historic moment with a win over Metallurg – now this team is demonstrating that it can mix it with the best.

SKA, meanwhile, shows some signs of returning to form under Alexei Kudashov. The Army Men’s win in Beijing was part of a four-game winning streak, but that stat need to be placed in context. Only one of those wins was secured in regulation, and whether on the road in the Far East or at home to Dinamo Riga, the Petersburg team would usually be a hot favorite in any of those games. Strikingly, two key players in those games were 19-year-old prospects Danila Galenyuk and Kirill Marchenko. The sudden emergence of youngsters in key roles is perhaps a measure of how the current SKA roster is falling below its usual high standards. Is it time for the Dragons to go one better than last week’s overtime loss?