Dragon fire too hot for Metallurg 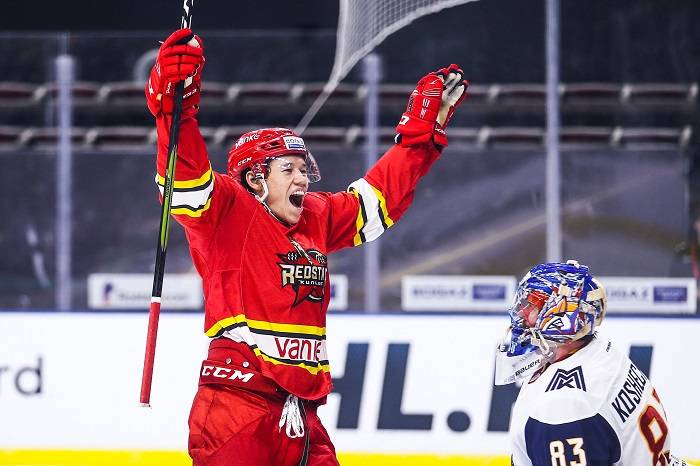 Another great performance from the Dragons brings another history-making result as Curt Fraser’s team saw off Metallurg to finish its home stand on a high note.

Prior to Sunday’s game, Red Star had never defeated Metallurg in a regular season encounter. Our only victory over Magnitka came in Beijing in the 2017 playoffs. More recent form offered little encouragement as well: three successive losses, albeit including an impressive display in an overtime defeat against SKA, came against a Metallurg team on a five-game winning streak.

But this team has shown in the past that it is capable of overcoming the odds, and another battling display secured a fully-merited 3-1 success over a team likely to be going deep into the playoffs once again this season. This was a hard-hitting performance, with 17 successful checks and a further 17 blocked shots highlighting the hard work our guys put in to overcome an in-form opponent.

The first period was a war of attrition, with the Metallurg forecheck stifling our offense at the same time as our guys put a solid barrier in front of the visiting forwards. But the middle session livened up immediately.

Red Star began by killing a penalty, and no sooner had Andrej Sustr emerged from the box than the Dragons took the lead. Ryan Sproul and Adam Cracknell passed their way around the Magnitka defense before the forward tucked away his fifth goal of the season. That moves Cracknell to 15 points for the season, two behind leading scorer Andrew Miller.

Our top-scoring defenseman was close to getting in on the act, firing a mighty shot that clanged against the post with Vasily Koshechkin floundering in the Metallurg net. The vastly experienced goalie was relieved to see the puck bounce to safety from the follow-up as well.

However, there were chances at both ends and when Metallurg got a power play it managed to tie the scores late in the session. A well-worked move left the home defense chasing shadows and Nikolai Kulemin’s pass to Eric O’Dell at the back door created a shooting lane for the Canadian to score his second goal in two games. But the setback did nothing to diminish Kunlun’s determination to overcome the opposition.

Early in the third period, the Dragons restored their lead. Spencer Foo’s thunderous shot flashed high and wide, but disoriented Koshechkin in the visitor’s net. The puck rattled around behind the net until Tyler Wong – whose feed set up the initial attempt – managed to steer it back out front for Foo to lift it into an open net with the goalie stranded.

Lifted by that goal, Kunlun had the better of the play in the final stanza. Metallurg’s hopes of launching a storm on Simon Hrubec’s net were thwarted not just by well-drilled defense but also by a team that kept looking to play on the front foot and take play away from its end as much as possible. And, late in the game, that approach got its reward with a third goal. Wong’s perfectly-placed pass from behind the net cut the Metallurg defense open and Luke Lockhart shot home his fifth of the season to take the game beyond the visitor.