First ever point against SKA 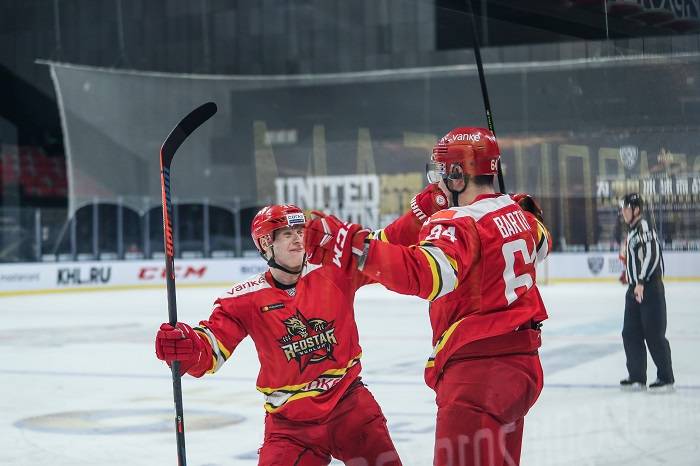 A frustrating power play was coming to an end, and Red Star was struggling to get shots at Magnus Hellberg. In the commentary box, KHL TV’s experts were discussing how the home power play simply wasn’t working today. With five seconds left before Sergei Plotnikov returned to the ice, Tyler Wong made one more effort to get the puck to the net but his attempted drop off for Spencer Foo fell short. Another chance lost? Not quite. Foo managed to force the puck forwards as SKA returned to full strength. Victor Bartley retrieved the loose puck behind the net and slammed it off Hellberg’s skate and into the net. Hardly the prettiest of goals, but a tying effort forged from sheer hard work and willpower.

That was enough to take a point from SKA for the first time in Red Star’s history. In six previous meetings, the Petersburg powerhouse had been utterly dominant. Today, that changed. The Army Men were limited to just two goals in regulation, having averaged five a game up to now. And the Dragons matched their illustrious opponent right the way into overtime before youngster Kirill Marchenko struck to give the win to the visitor.

It wasn’t always the prettiest hockey in the world. That second goal, all guts and determination, summed up a resilient Red Star performance that set out to neutralize one of the most powerful offenses in the KHL. And that stats show how that worked out, with little to choose between the teams over the course of the game. SKA edged the shot count 33-30, Kunlun had just over a minute more on the attack. Blocked shots were dead level at 15 each, Red Star had 12 hits to SKA’s 10. This was another day when our guys proved they can compete with the best.

Indeed, had it not been for a costly lapse in concentration early in the second period, this game could even have gone down as a famous victory. After matching SKA throughout a goalless first period, Red Star fell behind when it allowed two goals in 90 seconds. First, Anton Belov smashed home from the point as Joonas Kemppainen screened Jeremy Smith. Then, after an interception in center ice almost presented Alexander Barabanov with a second goal, SKA regrouped and Andrei Kuzmenko’s neat pass sent Alexander Dergachyov clean through to make it 2-0.

In the past, we’ve seen Kunlun teams buckle in situations like this. But this season’s roster has demonstrated more than once that it is made of stronger stuff. A time-out got the team back on track and much of the remainder of the middle frame was spent testing the visiting defense. That pressure paid off in the 33rd minute when a SKA attack broke down and Red Star moved swiftly up the ice. Ethan Werek brought the puck into the offensive zone and slipped a pass for Bartley to shoot over Hellberg’s glove from between the hash marks. That was our defenseman’s first goal of the season – and he didn’t keep us waiting long for the second.

But even before that tying goal, Kunlun had chances to tie the game. Brandon DeFazio found himself clean through on Hellberg’s net, only for the Swede to give us a reminder of the kind of form he showed as a Dragon two seasons ago. And the goalie had to be on top of his game in the third period as Red Star enjoyed some of its best hockey in this game as it forced a deserved equalizer.

Marchenko’s winner, of course, took the shine off the day. But as Curt Fraser and his team prepare for Sunday’s visit from Metallurg, there will be plenty of positives to add to the hard-won point garnered today.