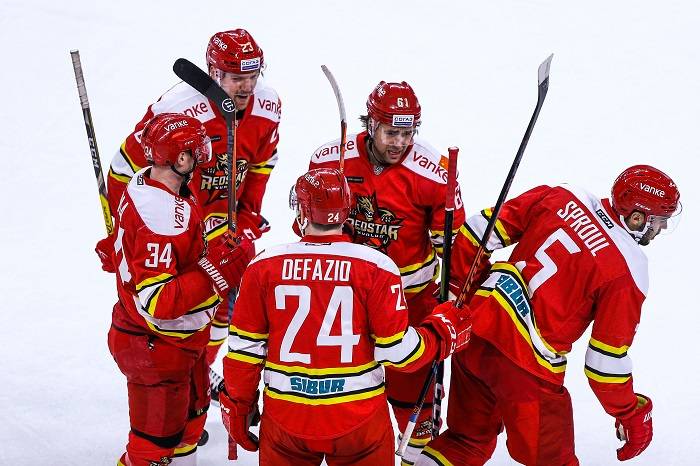 Ryan Sproul got his first goal for the Dragons, but it wasn’t enough to start our home stand with a victory over Jokerit. An entertaining clash saw the Finns sneak the verdict by the odd goal in five in the first game back after the international break.

The first period saw Red Star well on top, but unable to take its chances. And, hockey being the game that it is, that left our team vulnerable on the counterattack. So it proved. Aleksi Halme broke down the right, the defense anticipated a pass inside and left a tiny gap for the forward to attack and he wriggled through it to get to Jeremy Smith’s net and open the scoring.

Trailing 0-1 at the first intermission was hardly just reward for a strong effort in the first period. Justice was served midway through the second frame when Sproul tied the scores. When the former Red Wings blue liner arrived at the club there was much talk about the scoring potential he could bring in addition to his defensive duties. Today we saw how that might play out in reality. Brandon DeFazio’s pass to the deep slot gave Sproul the opportunity to unleash his slapshot and the puck cannoned in off the post, perhaps helped by a slight deflection off Teemu Eronen’s stick, to tie the scores. In five previous appearances, Sproul had one assist.

Unfortunately, the scores did not stay level for long, Jokerit regained the lead late in the middle frame with a somewhat fortunate tally. Marko Anttila slung the puck towards the net from wide on the right, Jesse Joensuu tangled with Denis Osipov in front of Smith and somehow the puck bounced through that crowd and into the net. A long video review finally ruled that the goal should stand and credited Anttila with the strike. Once again, the Dragons had to come from behind.

And, once again, the Dragons came from behind. Kunlun began the third period on the power play and duly converted the opportunity to make it 2-2. Lucas Lockhart got into a dangerous position, his pass left defenseman Viktor Loov in a spin and Tyler Wong was perfectly placed at the back door to slot into the open net. Wong hit a purple patch in mid-September, scoring four goals in three games. Hopefully this marker, his seventh of the season, can trigger another flurry of productivity.

Wong’s goal today was not enough to set up a home win. Instead, a Jokerit power play produced the decisive goal in the 46th minute. This time Alex Grant did the damage. His first shot from the blue line was blocked, but he collected the puck, advanced and fired through a crowded slot to give Smith no chance. Red Star fought hard to take the game to overtime and almost snatched a last-gasp tie when Andrew Miller was inches away from getting his stick to an inviting feed across the face of Janis Kalnins’ net. But on this occasion, it wasn’t to be; once again, we were not quite able to get the better of our Finnish opponent.