The Dragons are back in Beijing – and this week brings three top opponents to the Shougang Arena. Full of confidence after winning four games from five on their latest road trip, Curt Fraser’s guys are looking to keep the feel-good factor going and pick up more points on home ice. And, with the playoff place firmly within our sights, the upcoming encounters with three opponents for whom making post season is a minimum requirement will provide a stern test as well as a great opportunity to rate out team against some of the strongest outfits in the KHL.

There are three injury doubts going into the games, with Jake Chelios, Brayden Jaw and Brandon Yip all on the treatment list. However, there is good news with the return to fitness of Vic Bartley – and there’s also a first chance for fans in Beijing to get a look at new signing Devante Smith-Pelly as the former Washington Capital gears up for his home debut. 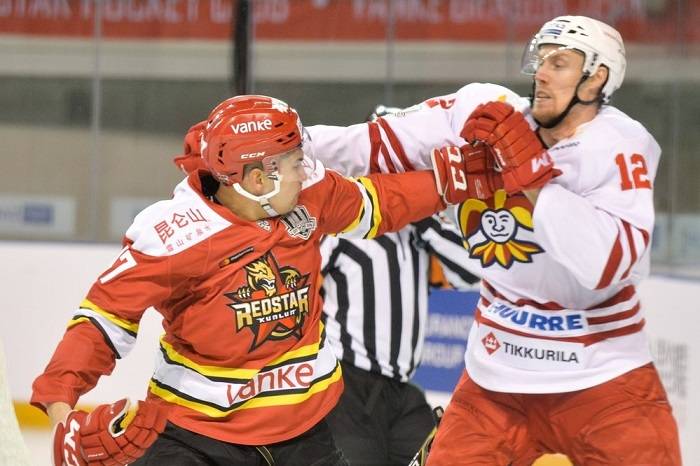 Last season: Our two games against the Finns ended in disappointing defeats – 3-6 in Helsinki at the start of the season, then 3-5 in Shanghai in January. Red Star has only once beaten Jokerit, a 6-3 victory on home ice in Jan. 2017.

Familiar faces: Our own Olli Palola spent the 2017/18 season with Jokerit, where he hit a rich vein of form in the playoffs, scoring six goals in 10 games. Veli-Matti Savinainen returned home to Finland after playing for Red Star last season. The 33-year-old had 18 (9+9) points in 37 games for us.

Background: Consistently inconsistent. That’s the best summary of Jokerit’s season so far in the KHL. At times, Lauri Marjamaki’s team has been excellent. A 3-0 win at defending champion CSKA is one of the stand-out results of the season so far, and there have been high-scoring victories against Dinamo Riga (7-2), Lokomotiv and Severstal (both 4-1 on the road).

But there have been some alarming lapses as well. A 0-5 loss at struggling Dinamo Minsk, a 1-5 drubbing at home to Loko and twice blowing big leads against Torpedo. Even on the team’s best streak of the season, six straight wins from Sep. 29 to Oct. 13, five of the results were one-goal games, and three of them came in overtime or shoot-outs. It’s not the grindingly reliable Finnish hockey we’re used to on the international stage, even if the likes of Marko Anttila, Sakari Manninen and even former Dragon Veli-Matti Savinainen all played a big role in the World Championship win last May.

Anttila has recently hit a bit of form, with 4 (2+2) points in his last five games. Defenseman Mikko Lehtonen has also been a solid contributor this season, while forwards Brian O’Neill and Peter Regin always supply a goal threat and summer acquisition Henrik Haapala shows signs of turning into a high-class playmaker. But there’s a sense that Jokerit is a somewhat patchy team this season and, with its preparations disrupted by Team Finland’s involvement in last week’s Karjala Cup, this may prove a good time to take on our rival from Helsinki.

Last season: The Dragons have never beaten SKA, and last season saw a 1-5 thumping in Petersburg followed by a 3-5 loss at home.

Background: On the face of it, completing the first phase of the regular season with the team in second place in the Western Conference should be a cause for optimism. However, standards at SKA are so high that not everyone is wholly convinced by the team’s performances under new head coach Alexei Kudashov. The former Atlant and Lokomotiv boss was appointed in the summer, replacing Ilya Vorobyov behind the bench for club and country. He arrives in Beijing fresh from leading Russia in competitive action for the first time at the Karjala Cup, a tournament that brought more questions to his door.

In the KHL, meanwhile, his team has the sixth best record and underwent a five-game losing skid last month. Indeed, you have to go all the way back to October 13 to find a win in regulation time when the Army Men triumphed 4-1 at Torpedo. The club has shuffled the roster: Artyom Shvets-Rogovoi and Alexander Samonov arrived from Vityaz, Igor Ozhiganov came from Ak Bars. But there’s a sense that this SKA team, stripped of several of last season’s stars including freescoring forward Nikita Gusev – who scored 10 points in his appearances against Red Star – is not quite the unstoppable force it once was.

Last season: Both games against Magnitka ended in 1-3 losses. Red Star has yet to win against Metallurg in regular season action, but our only win in a playoff game to date came against the men from Magnitogorsk.

Familiar faces: Wojtek Wolski won a Gagarin Cup with Metallurg in 2016, with Denis Osipov also playing a part in that season.

Background: Metallurg, not unlike Kunlun, is steadily hitting its best form after a slow start to the season. The Steelmen replaced head coach Josef Jandac with Ilya Voroboyov early in the campaign and in recent weeks the team put together a run of seven wins in eight to climb into the playoff places. Goalie Vasily Koshechkin played a big part in that revival, posting three successive shut-outs to help defeat Avangard, Ak Bars and Avtomobilist while completing the fifth longest goal-free sequence in KHL history.

Metallurg’s slow start is partly down to a rebuild of the squad during the summer. Not all of the new arrivals have clicked into place immediately, although Denis Parshin is making a positive contribution following his arrival from Torpedo. Fellow new arrival Brandon Kozun is on the injured list while former HC Sochi favorite Eric O’Dell is only just back with the team after missing out on October’s schedule with a knock.