The Dragons continue their road trip full of confidence after three victories at Avangard, Vityaz and Dinamo Riga. That extended the team’s current winning streak to four games and a win at Torpedo on Hallowe’en would set a new club record for consecutive victories in the KHL.

That hot streak also sees the team on the cusp of a top-eight spot as the first phase of the season comes to an end. Although our guys are just outside the playoff spots at the time of writing, a solitary point separates four teams from Admiral in sixth down to ourselves in ninth. There’s everything to play for before the pause for the November internationals. 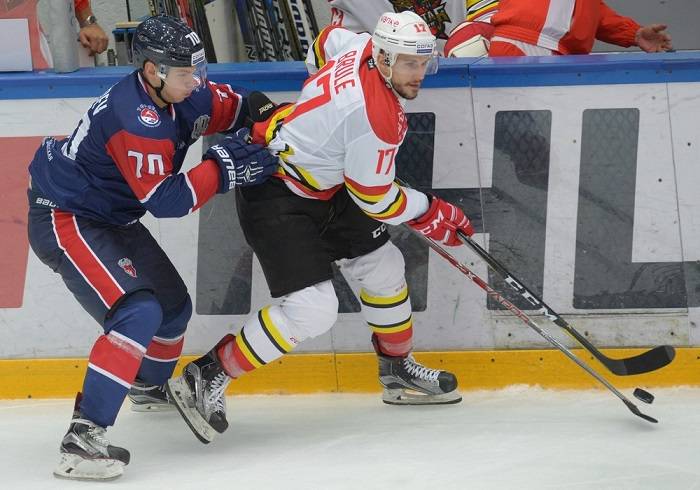 Last season: The 2018/19 campaign saw Red Star take points from Torpedo for the first time. Both games went to overtime, but we are still waiting for our first victory over this opponent.

Familiar faces: Wojtek Wolski began his KHL career with Torpedo, but injury looks likely to rule him out of a return to Nizhny Novgorod this month.

Background: Torpedo is making solid progress in the Western Conference this season after being transferred back across the geographical border to even up the numbers following the departure of Slovan Bratislava. So far, David Nemirovsky’s team has 13 wins in 24 games to sit in sixth place, one point behind SKA and Spartak.

Home form has been a big part of that: Torpedo has won eight of 12 on home ice, including a victory over defending champion and league leader CSKA. Last week’s 3-1 loss against Spartak was only the third time a visiting team had won in regulation in Nizhny Novgorod, suggesting a tough destination for any opponent. That isn’t down to a stellar roster, but a well-drilled team getting the best out of its resources. Damir Zhafyarov is the leading scorer and has been rewarded with a call-up for Russia’s Karjala Cup roster, while veteran Mikhail Varnakov continues to make a valuable contribution.

The game could feature the youngest current KHL player. Torpedo’s Andrei Nikonov made his debut against CSKA on October 21 at the age of 16 years, 353 days. He’s the first player born in 2002 to feature in the league and joint seventh youngest debutant. Curiously, he shares that mark with Vitaly Kravtsov and Artemy Panarin, two illustrious products of the competition.

Last time out: It’s only a few days since we defeated HC Sochi 3-2 in Beijing. The game was notable for Red Star taking just two minutes of penalties, a huge improvement in our discipline and one that helped to lay the foundations of a winning performance.

Familiar faces: Sean Collins and Ivan Nalimov both represented Red Star before joining Sochi. In Collins’ case, he was one of the successes of our inaugural season; Nalimov managed a handful of games during his brief spell with the club.

Background: Since that victory over Sochi in Beijing, plenty has changed for the Black Sea team. After a brief spell as interim head coach, Leonids Beresnevs has been replaced by a permanent incumbent, Alexander Andrievsky. The Belarusian won his first game in charge, defeating Salavat Yulaev 3-1 and the team is on a two-game winning streak after sinking Admiral to snap an eight-game losing run.

The Leopards now find themselves in a similar position to the Dragons: just outside the top eight but only a point adrift of a playoff place. And, like ourselves, they will be keen to string together a run of victories that can push the team up the table and away from the chasing pack. For both teams, it’s the last game before the international break – and it’s going to be important to finish the first phase of the season on a high note.