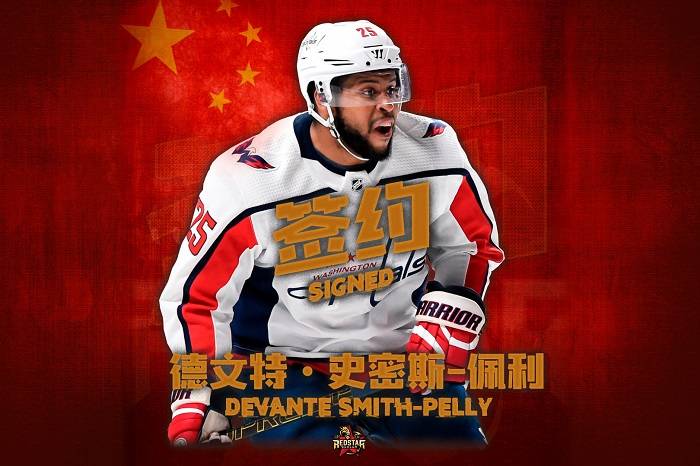 In Red Star’s short history, our team has already enjoyed the talents of World Champions and Olympic medalists. Today, for the first time, we can add a Stanley Cup winner to the ranks. Devante Smith-Pelly is the latest recruit to enter the Dragons’ lair, and the former Washington Capital was one of the stars of the team’s run to the big prize in 2018.

Usually deployed as a bottom six power forward in Washington, Smith-Pelly hit a rich vein of form in that playoff campaign, scoring seven goals (as many as he managed throughout his 75-game regular season). Three of those came in the final series against the Vegas Golden Knights, and his last contribution was the tying goal midway through the third period of game five that paved the way for Lars Eller to grab the game-winner and give the Caps their first ever cup.

Devante’s NHL career began in Anaheim after he was drafted by the Ducks in 2010. He made his debut in 2011/12, and had 49 appearances in his rookie year, collecting 13 (7+6) points. He spent the bulk of the next two seasons playing in the AHL, however, but returned to the big league in time for his first taste of playoff action in 2013/14. Post-season hockey suited him, and he potted five goals in 12 games.

Traded to the Canadiens in 2014/15, Smith-Pelly began a peripatetic sequence that saw a spell in New Jersey before he arrived in Washington at the start of the 2017/18 season. On a team boasting the offensive prowess of Alexander Ovechkin, Evgeny Kuznetsov and Niklas Backstrom, he was destined to play a supporting role. However, his hard-hitting, forechecking style added some much-needed steel to a Capitals’ roster that was always stacked with skilled but often faced questions about its ability to play the ugly parts of the game. Answering those questions, with Devante’s help, led to that historic cup win.

In total, Smith-Pelly played 446 games in the NHL, scoring 117 (57+60) points. After he was released by Washington at the end of last season, he had a try-out in Calgary but could not agree a role there. The 27-year-old Ontario native comes to China for his first taste of hockey outside of North America.