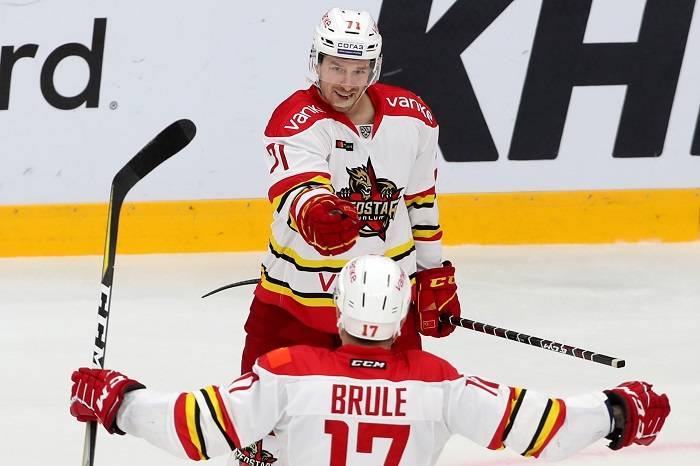 Three goals for Andrew Miller and three wins on the spin for the Dragons. By any reckoning, that’s a highly satisfactory day’s work for our team as Red Star recorded a 4-2 victory over Vityaz and climbed to ninth place in the Eastern Conference. That’s just one point and one place outside the playoff spots with a game in hand on Metallurg and Neftekhimik above us. It also moves us ahead of Avtomobilist, tipped by many to be among the top teams in the East this season.

There are also hugely promising signs of greater consistency in this team. The last time Red Star won three in a row was more than two years ago, in late September and early October 2017. Since then, it’s been difficult to put any kind of winning streak together and that is something that has hampered the team’s efforts to climb the table. For much of this season, the pattern has been similar, with wins and losses alternating, but there are signs this could be changing. Three successive wins, points from four of the last five; it’s the kind of sequence that can make a huge difference in a league as tight as this one, with just three points separating seventh from 12th.

And what of the performance? Not surprisingly, Miller will claim the headlines after becoming the fourth Red Star player to get a hat-trick. Two of his predecessors, Brandon Yip and Olli Palola, are still at the club – both had assists today – while the third, Drew Shore, moved to Dinamo Minsk over the summer. But there were also notable contributions all over the ice. Goalie Jeremy Smith had another big game, including a fantastic stop to deny Alexander Semin a tying goal when the score was 2-3. Our defense, reinforced with Ryan Sproul and Griffin Reinhart, already looks more composed. And the offense is delivering goals at a faster rate. Gone, hopefully, are the days of eking out 2-1 wins; this team is starting to boast some firepower.

The scoring started early on Sunday. With less than 90 seconds played, captain Yip’s vision found Miller in a bit of space in front of the net. A perfectly weighted pass and a deadly finish put the Dragons 1-0 up. Midway through the first period the same two players were at it again. This time it was a Yip shot that thudded into Ilya Ezhov’s pads and bounced for Miller to shoot into the net. It was a very happy team that filed into the guest’s locker room in Podolsk at the first intermission. 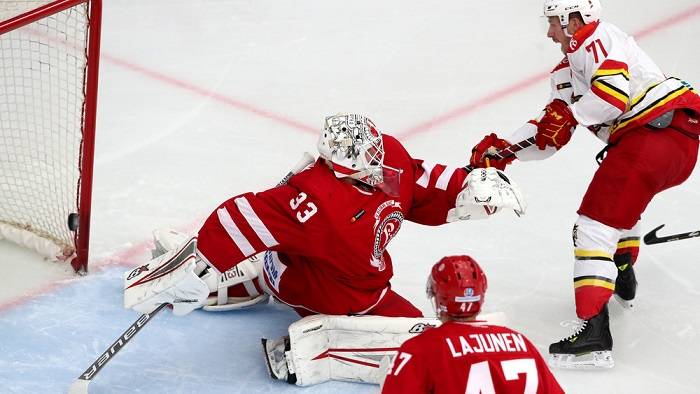 However, there is rarely success without adversity and in the second period Red Star had to battle through the hard yards. First, Yip left the game with an injury. Then Vityaz began to generate more significant offense and fought back to tie the game on goals from Pekka Jormakka and Alexander Semin. A game that seemed close to being won was blown wide open and there was everything to play for. The next goal felt like it would be crucial – and Miller duly obliged with his third of the night. This time, with the teams playing 4-on-4, he saw his first shot blocked only for Gilbert Brule to return the puck to the top of the circle where our leading scorer took his tally to 16 (6+10) points for the current campaign.

There was still a job to be done in the third period. Smith had to be alert to an unorthodox attempt from Alexander Makeyev, recently called up to Russia’s team for the Karjala Cup. The defense was put through its paces to kill Adam Cracknell’s goalie interference penalty. But, amid the home pressure, the guys kept working and got their reward when Palola and Ethan Werek forced a turnover on the blue line and Werek streaked up the ice to beat Ezhov and make it 4-2. This was a two-goal lead that we weren’t going to surrender – and the victory sets up Tuesday’s trip to Riga nicely. Success there, against the team placed last in the Western Conference, would bring four straight victories, something our team has not achieved since Mike Keenan’s first weeks behind the bench in August and September 2017.